Devices known as universal quantum computers can be programmed to run different algorithms, thereby dispensing with the need to build new quantum computers for different functions. Fully fledged digital quantum simulations on such a device would allow substantial progress to be made in a wide range of disciplines, from quantum chemistry and materials science to fundamental high-energy physics. However, for this approach, it remains difficult to incorporate the many quantum bits (qubits) that are required for complex simulations. By contrast, large-scale analog quantum simulators already exist in today’s laboratories. But, unlike their digital counterparts, these simulators are not programmable in general, and are often considered to be dedicated, single-purpose machines. Now, in a paper in Nature, Kokail et al.1 report a programmable analog quantum simulator that is versatile and has the potential to be scalable. 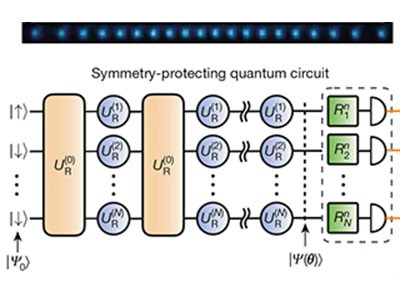 The authors’ simulations run on a combination of a classical digital computer and an analog quantum processor. The latter does the hard work of preparing trial states — quantum states that are used to evaluate physical quantities. The classical computer analyses the results of these evaluations, with the aim of optimizing certain adjustable (variational) parameters on which the trial states depend. This computer then suggests improved parameters to its quantum co-worker in a feedback loop. In the study, the quantum device contains a line of atomic ions that each represent a qubit. Such trapped ions can be used for analog simulations of other quantum systems, which can be very different from the ions themselves.

Kokail and colleagues use this set-up to carry out quantum simulations of the ground state of electrons coupled to light — a system that is described by the theory of quantum electrodynamics in one spatial dimension. Some of the authors were involved in the first digital simulation of this theory, on a four-qubit universal quantum computer2. By contrast, the current set-up includes up to 20 qubits. And although it is non-universal, the same analog quantum simulator could be used to study a wide range of models that can be defined on a lattice in condensed-matter and high-energy physics. These applications are restricted only by general requirements, such as the symmetries of the physical system to be simulated.

Similar hybrid classical–quantum algorithms have been demonstrated, using up to six qubits, in quantum chemistry, condensed-matter physics and high-energy physics3–5. With regard to the key property of potential scalability, the computational capabilities of the classical computer involved can be very restrictive. However, Kokail et al. show a promising way forward, which is mainly based on identifying and using approximate physical symmetries to reduce the number of variational parameters that need to be determined by the classical computer.

Kokail and colleagues also address the crucial question of how to verify that the outcome of a large-scale quantum simulation is correct. In addition to computing the mean energy of the ground state in their set-up, the authors calculate how much the energy varies from this mean value. They find that the variance is small enough for the results to be considered reliable. The ground-state energy of quantum electrodynamics might not seem the best example with which to demonstrate the power of the authors’ approach — in principle, the results in this case could be obtained on any ordinary computer using standard classical-simulation techniques. But it is precisely this fact that makes the example a valuable test case.

There are many other pressing problems for which simulators involving analog quantum devices could be a game-changer. An example of such a problem is the Hubbard model6, which is a model of the dynamics of electrons arranged on a periodic lattice. Despite its simplicity and potential for use in a variety of technological applications, the Hubbard model remains a difficult problem in general. Electrons are fermions — particles whose key property is that only one of them can occupy a particular quantum state at any given time. Such behaviour is most efficiently simulated using an analog device, rather than a digital one. It is an exciting prospect for future applications that fermions could be incorporated into Kokail and colleagues’ versatile set-up, with the help of a quantum processor containing ultracold fermionic atoms.

In general, large-scale analog quantum simulators could be much more versatile than anticipated on the basis of their behaviour with only a few qubits. This is because quantum many-body systems can behave very differently from few-body ones. For instance, in high-energy physics, the ‘empty’ vacuum is already a complex quantum system that requires a huge number of qubits to simulate it. However, only a small subset of the microscopic details of the underlying theory is relevant for the computation of measurable physical properties, using a concept known as the renormalization program of quantum field theory7. As a result, for an analog quantum simulation of such an underlying theory, many of the detailed properties of the device have no effect on the outcome of the simulation.

An extreme case is when the dynamics of a quantum many-body system becomes fully ‘universal’. Here, universality means that certain measurable properties have no dependence on microscopic details. Then, a single analog quantum device could be used to simulate all physical systems that belong to the same universality class, subject only to general requirements such as physical symmetries. This concept is well established for some ground-state or static properties. But universality has now been extended to run analog quantum simulations of dynamical aspects far from the ground state, such as the dynamics of the early Universe, with the help of ultracold atoms8,9.

As Kokail and colleagues point out, future developments might bridge or even close some of the gaps between the concepts of analog and digital quantum simulation. The authors’ work is a key step in that direction.

Sign up for the daily Nature Briefing email newsletter

Stay up to date with what matters in science and why, handpicked from Nature and other publications worldwide.

Huge Growth of Next Generation…

Huge Growth of Next Generation…