Latest News
Home /Synopsis: A Record Number of Atoms Trapped in a Pattern (via Qpute.com)

Researchers trap 111 neutral atoms in a predefined, defect-free motif using a new method that could, in the foreseeable future, control one million such atoms.

Neutral atoms trapped in an array of optical traps can act as qubits for quantum computing applications. But first, researchers need to accurately position the atoms within the array to create defect-free patterns that they can then manipulate and use for calculations. In 2018, researchers arranged 72 atoms in various motifs, including a knot and a cube. Now Gerhard Birkl and colleagues at the Technical University of Darmstadt in Germany demonstrate a new method for patterning atoms that takes that number to a record 111. They say that their method should be easily scalable, potentially to one million atoms or more.

Birkl and colleagues cooled a cloud of rubidium atoms to 100

K. They then loaded the atoms into a microtrap array—hundreds of laser traps arranged in a square lattice that they created by directing a laser beam through an array of microlenses. Initially each trap contained a few atoms. To reduce this number to one, the team used a technique called collisional blockade to remove pairs of atoms from each site. Sites that initially housed an odd number of atoms were left with exactly one. Those with an even number ended up with zero. The team then moved single atoms to any empty site in their target pattern using laser tweezers.

Using their method, the team created a 10-by-10-atom square, a checkerboard made of 105 atoms, and two interconnected squares that contained 111 atoms. They are now working on patterns containing 1000 atoms. Birkl says that the only roadblock to arranging larger numbers of atoms is financial—to create more trap sites, they will need to purchase more powerful lasers.

Katherine Wright is a Senior Editor of Physics. 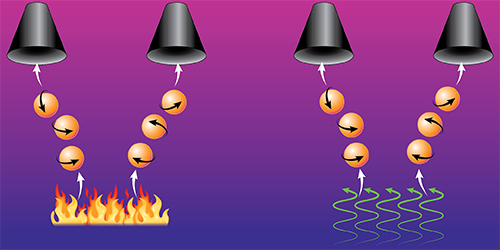