“Today, people are frustrated when a digital assistant says, ‘Sorry, I couldn’t understand that,’” said Mr. Chapman, who was named chief executive of the venture-capital-backed startup this week after about five years as director of engineering for Amazon.com Inc.’s Amazon Prime. Quantum computers “could alleviate those problems,” he said. 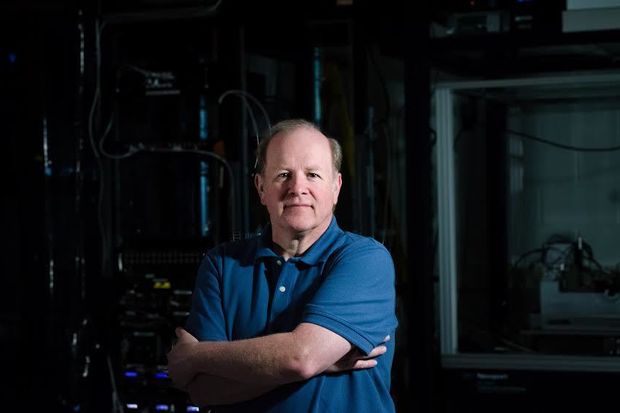 That’s because quantum computers have the potential to sort through a vast number of possibilities within a fraction of a second to come up with a probable solution. A Rubik’s cube, in an analogy to illustrate the power of quantum computers, could be solved instantaneously because the technology can process different combinations at once. A classical computer, by contrast, would need to search through the possibilities sequentially, which could take days, months or even longer, IonQ executives say.

Quantum computing harnesses the power of quantum bits, which can represent and store information in both 0s and 1s simultaneously, compared to binary digits, or bits, which can either be 0s or 1s and which have dominated the computing industry to date.

IonQ’s method of commercializing quantum computing involves quantum bits based on trapped ions, which naturally exhibit quantum mechanical effects such as superposition, or 0s and 1s existing simultaneously. The company has told CIO Journal previously that trapped ions are more likely to scale, with better performance and increased predictability than other methods.

Mr. Chapman, who began his career as a software engineer at the Massachusetts Institute of Technology working with artificial-intelligence pioneer Marvin Minsky, said that quantum-computing power could also help combine knowledge across multiple disciplines into one single AI system. A digital assistant with expertise in physics, chemistry and material science could help solve problems that humans with one area of expertise can’t, he said.

Julie Love, director of quantum business development at Microsoft Corp., says quantum computing’s potential impact on AI models is “a real selling point” for business customers. Theoretical research on the topic has shown that quantum-based machine learning systems can be trained on data exponentially faster than on classical computers, she said. Machine learning, a type of artificial intelligence, is the science of getting computers to act intelligently without being explicitly programmed. “There’s real potential here to accelerate machine learning,” Ms. Love said.

AI and quantum computing will work hand in hand in the future, said Arvind Krishna, senior vice president of cloud and cognitive software at International Business Machines Corp. Quantum computers can make AI even more powerful, he said in an interview Wednesday at the WSJ Future of Everything event in New York City.

researchers published in Nature in March showed that quantum computing can improve AI dramatically, not just because they can work faster than traditional computers, but because they can do things differently. AI systems depend on massive amounts of data that algorithms ingest, classify and analyze. Quantum computers can help more precisely classify that data according to specific characteristics. Eventually, quantum computing-based AI algorithms could help identify patterns that are invisible to classical computers.

Problems that could be solved using both AI and quantum computing include discovering new materials that are more energy-efficient and that don’t contribute to pollution, Mr. Krishna said. The two technologies will also be useful in solving traffic optimization problems, such as calculating routes that will reduce traffic congestion and pollution in real-time, he said.

Companies are already experimenting with how AI and quantum computing could work together to solve business problems and yield new discoveries. Volkswagen AG, for example, has used the two technologies to develop a quantum-computing-based traffic management system. The system, which Volkswagen hopes to offer as a commercial service, could be embedded in its vehicles or could be used by public-transportation or ride-sharing companies to predict revenues based on more accurate passenger demand.