Laser light has interacted with mechanical vibrating membranes proving that energy can be made to flow in one direction only, potentially enabling more reliable quantum computing and cooler communication systems that have clearer signals.

In electronics, the energy coursing through the circuits will follow a basic symmetry found in all physical systems, which means that energy flowing in one direction can flow back the way it came. Referred to as reciprocity, this symmetry means energy and information is exchanged between two systems like a two-way street. This can be a contributor to heating or noise for a sensor. The possibility of stopping this direction reversal to protect and cool sensitive electronics was confirmed with a laser that was able to make sound waves in a membrane travel in one direction. The principle could also have practical applications in mobile devices.

“The filters and duplexers in mobile phones, you can take our ideas and make these common elements that involve small vibrating objects, you could make them (the vibrations) go in a single direction,” says University of Chicago molecular engineering professor, Aashish Clerk. “You can swop the role of light for another electrical circuit to play the role of the laser.”

The laser, membrane experiment was carried out by researchers with the Institute for Molecular Engineering at the University of Chicago and Yale University. What led to this experiment was theoretical work carried out by Clerk and his colleagues. “My group has been thinking of the theory for this one-way flow of energy and information for quite some time, our first paper was probably 2015,” he explained. For the experiment, researchers used a tiny vibrating membrane, much like a drumhead, and this membrane could vibrate in several distinct resonant frequencies. 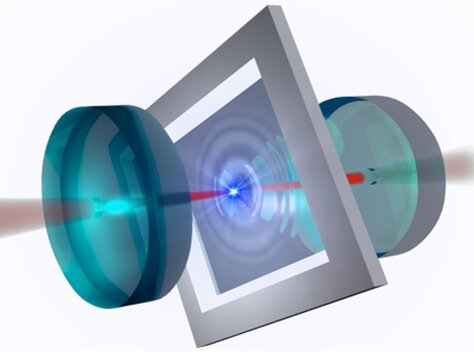 The image shows a silicon frame (gray square) which supports a flexible membrane (gray with ripples, etc.) made of silicon nitride. It is surrounded by two mirrors (green). When laser light of the appropriate wavelength is incident on the mirrors (pale red) it gets trapped between the two mirrors (bright red). The radiation pressure from this trapped light can stiffen, soften, damp, or amplify the membrane’s motion. Credit: Jack Sankey

The membrane was put inside an optical cavity with two parallel mirrors, which are designed to trap light. By shining laser light onto the cavity, the light acted as a medium for transferring mechanical energy between two vibrational modes. When the lasers were tuned, this transfer mechanism was completely directional, as Clerk predicted. “You can use light to exert forces on a mechanical object, light has momentum. Shine a laser on an object, it pushes the object a little bit,” he explained. “Because the light is trapped with those mirrors the forces can become big enough that those forces can be big enough to kick the mirror around.”

Clerk says that by using more than one laser to fire light into the optical cavity, the combined forces of that coherent light means that two different vibrational modes (of the membrane) can be achieved. One vibration mode could have areas on the membrane with no movement, while the other mode, there is only movement. “You use light to transfer energy between the two modes and you can make the energy flow in one direction,” he added. The single flow of energy could help quantum computers where the returning energy and information would otherwise disrupt the computation for these sensitive machines. Clerk is working with the Polsky Center for Entrepreneurship and Innovation at the University of Chicago. The laser, membrane work was funded by the United States Air Force Office of Scientific Research and the Simons Foundation.

Goldman Sachs and the Quantum…