Latest News
Home /Physicists save Schrödinger’s cat and bring us closer to quantum computers (via Qpute.com)


Managing quantum data and correcting errors are the biggest challenges that scientists face in the development of fully practical quantum computers. A new study performed by researchers at Yale University might offer the means to overcome this predicament — while also saving Schrödinger’s famous cat. 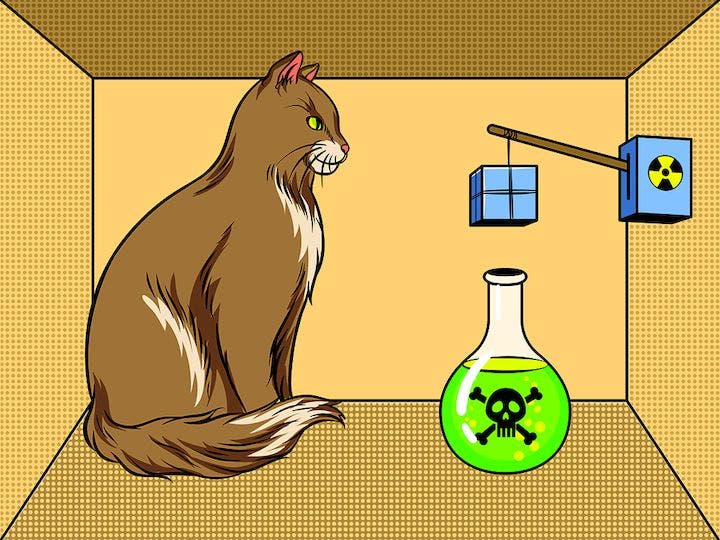 In 1935, in an attempt to mock the Copenhagen interpretation of quantum mechanics, Erwin Schrödinger proposed a thought experiment: a cat is placed in a sealed box along with a radioactive sample, a Geiger counter and a bottle of poison.

If the Geiger counter detects that the radioactive material has decayed, it will trigger the smashing of the bottle of poison, killing the cat. Effectively, the cat’s life depends on the quantum mechanics determined state of a radioactively decaying atom.

The ‘Copenhagen interpretation’ of quantum mechanics states that a particle exists in all states at once until observed — something which physicists call “superposition”. Conversely, the radioactive material can have simultaneously decayed and not decayed in the sealed environment. It follows that Schrödinger’s cat is both alive and dead until one opens the box. Of course, everyone thought this was absurd, but it’s precisely this absurdity that Schrödinger was trying to convey. However, we now know from experiments that superposition is actually real in quantum mechanics, no matter how weird it may sound.

So, the radioactive atom and kitty are intimately “entangled” with each other. But once an observer opens the box, the “superposition” of the cat—the idea that it was in both states—would collapse into either the knowledge that “the cat is alive” or “the cat is dead,” but not both. This abrupt change in the atom’s quantum state is supposedly random and called a “quantum jump.” The notion of a quantum jump was first described by Danish physicist Niels Bohr but it wasn’t until the 1980s that it was observed in atoms for the first time.

“These jumps occur every time we measure a qubit,” said Michel Devoret, Professor of Applied Physics and Physics at Yale and member of the Yale Quantum Institute. “Quantum jumps are known to be unpredictable in the long run.”

The nature of this superposition collapse is very annoying and troublesome for practical applications of quantum technology. Devoret and colleagues wanted to see whether it was possible to get an advanced warning signal that a jump was about to occur.

For their experiment, the researchers indirectly monitored a superconducting atom or qubit (the basic unit of information in a quantum computer) which was blasted by three microwave sources inside a 3-D cavity made of aluminum. Some of the microwave radiation switched the qubit between energy states, while another beam of radiation measured the cavity. In the qubit’s ground state, the microwave beam exposure releases photons. So a sudden absence of photons means that the qubit is about to make a quantum jump into an excited state.

“The beautiful effect displayed by this experiment is the increase of coherence during the jump, despite its observation,” said Devoret.

“You can leverage this to not only catch the jump, but also reverse it,” lead author Zlatko Minev added in a statement.

The experiment’s findings contradict Bohr showing that quantum jumps are neither abrupt nor as random as previously believed. Instead, a quantum jump always occurs in the same, predictable manner from its random starting point. This deterministic nature means that it can also be reversed with another pulse of microwave radiation, sending the qubit back into a ground state. In other words, saving Schrödinger’s cat.

“Quantum jumps of an atom are somewhat analogous to the eruption of a volcano,” Minev said. “They are completely unpredictable in the long term. Nonetheless, with the correct monitoring we can with certainty detect an advance warning of an imminent disaster and act on it before it has occurred.