The project, documented as a Featured Article in the journal Applied Physics Letters, exploits strain at highly spatially localized and well-separated emission sites, or tips, in a tungsten/selenium film. The team synthesized the film through chemical vapor deposition using a multi-step, diffusion-mediated gas source. 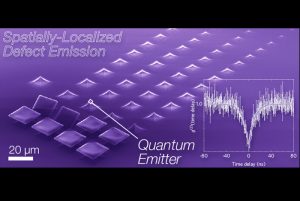 “While more research is needed to fully understand the role of mechanical deformation in creating these quantum emission sites, we may enable a route to control quantum optical properties by using strain,” Pettes said. “These single-photon sources form the basis for photonics-based, all-optical quantum computing schemes.”

Engineering of quantum emission in 2D materials is still in a very early stage, the authors note. While studies have observed single photons originating from defect structures in these materials, previous work has suggested that non-uniform strain fields might govern the effect. However, the mechanism responsible for this emergent phenomenon remains unclear and is the focus of ongoing work at Los Alamos.

PolyU’s lightweight Textile Lithium Battery demonstrates high energy density of more than 450 Wh/L, and excellent flexibility — with a bending radius of less than 1mm, and foldability of over 1,000 cycles with marginal capacity degradation. In comparison, the existing bendable lithium battery can only reach a bending radius of about 25 mm, and with much lower performance of less than 200 Wh/L. The Textile Lithium Battery, less than 0.5 mm thick, also possesses fast charging/discharging capability, and long cycle life comparable with conventional lithium batteries.

The innovation was developed by the research team of PolyU’s Institute of Textiles and Clothing (ITC).

Professor Zheng Zijian, who leads the ITC research team, said, “Wearable technology has been named as the next global big market opportunity after smartphones. Global market revenues for wearable devices are forecasted to grow by leaps and bounds, of over 20% annually, to reach US$100 billion by 2024. As all wearable electronics will require wearable energy supply, our novel technology in fabricating Textile Lithium Battery offers promising solution to a wide array of next-generation applications, ranging from health care, infotainment, sports, aerospace, fashion, IoT to any sensing or tracking uses that may even exceed our imagination of today.”

Zapping graphene to make it a semiconductor material
An international research team used a laser technique to transform graphene, a super-thin material that is at least 100 times stronger than steel, into a semiconductor that may replace silicon on a computer chip in the future.

Graphene, the best known conductor of heat and electricity, would need to carry an electric current that switches on and off to express 0 and 1 that a computer uses for processing information.

Researchers from Purdue University, the University of Michigan, and the Huazhong University of Science and Technology used a technique called laser shock imprinting to permanently stress graphene into having a structure that allows the flow of switching electric current, according to the study published in the journal Advanced Material.

Electrons jump across the bandgap structure to become a conductor, but graphene doesn’t naturally have a bandgap.

The researchers used a laser to create shock wave impulses that penetrated an underlying sheet of graphene. The laser shock stretches the graphene onto a permanent, trench-like mold. Hence, they widened the bandgap in graphene to a record 2.1 electron volts. Previously, scientists achieved 0.5 electron volts, barely reaching the benchmark to make graphene a semiconductor like silicon.

“This is the first time that an effort has achieved such high bandgaps without affecting graphene itself, such as through chemical doping,” said the paper’s corresponding author, Gary Cheng, professor of industrial engineering at Purdue.

It is still far from making graphene into a semiconducting device, but the technique provided more possibilities in taking advantage of the material’s optical, magnetic, and thermal properties, according to Cheng.

The photonic band-edge lasers can operate at superfast speeds and have the potential to help the global electronics industry deliver a range of new applications—from optical computing to remote sensing and heat seeking.

“This is the first demonstration that shows how photonic band-edge lasers can be integrated directly on patterned silicon-on-insulator platforms,” said Professor Huffaker. “Silicon is the most widely used material in semiconductor industries. However, it has been difficult to integrate compact light sources on this material. Our research breaks through this barrier by developing extremely small lasers integrated on silicon platforms, applicable to various silicon-based electronic, optoelectronic, and photonic platforms.”

Dr. Wyn Meredith, Director of the Compound Semiconductor Centre, a joint venture between IQE Plc and Cardiff University, said: “This research will have long-term implications in the rapidly expanding field of photonics, with a particular emphasis on driving commoditization of high-volume, high-specification optical components for mass market communications and sensing applications.”