Four additional states are joining the legal fight against T-Mobile’s $26.5 billion bid for Sprint in a case that lawyers on both sides say they hope will reach trial in October.

Hawaii, Massachusetts, Minnesota and Nevada will join nine other states and the District of Columbia, which had sued to block the merger, saying it will reduce competition and damage consumers by driving up prices for cellphone service.

Beau Buffier, a lawyer for New York state’s attorney general, told a judge at a Manhattan federal court hearing Friday that the states were added to a rewritten version of a lawsuit filed 10 days ago.

T-Mobile and Sprint – the third and fourth largest mobile wireless networks in the U.S. – say the merger is necessary for them to upgrade to a fast, powerful ‘5G’ mobile network that competes with Verizon and AT&T. 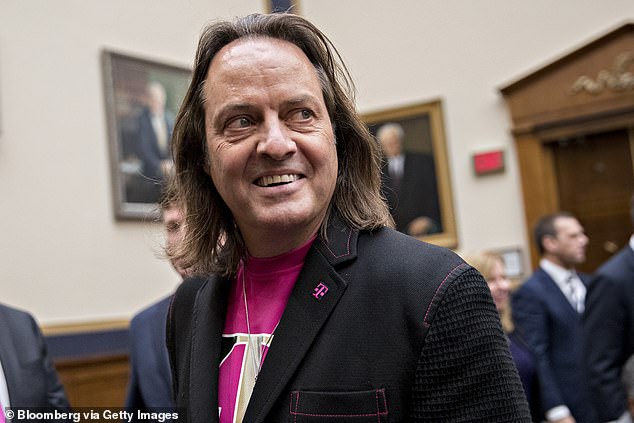 T-Mobile CEO John Legere is seen above in March. The company hopes to seal a deal to acquire Sprint for $26.5 billion, saying the companies will compete better together

President Donald Trump has said he wants the U.S. to ‘win’ a global 5G race.

The Justice Department has not yet spoken on whether the deal complies with antitrust laws. The Republican majority of the Federal Communications Commission supports the deal.

Subscribers as of first quarter 2019:

At the lawsuit’s first hearing Friday, T-Mobile attorney George Cary defended the merger, saying the deal will improve competition by combining T-Mobile, with 79 million subscribers, and Sprint, with 54 million subscribers, letting them compete more effectively against the bigger players.

He said the combined T-Mobile and Sprint will be ‘much more competitive.’

‘We think the competition now has benefited Americans, Californians,’ she said. 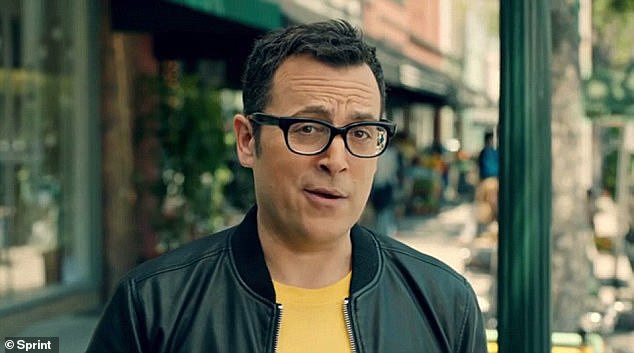 Sprint is the smallest of the big four carriers, but made a splash by poaching former Verizon spokesman Paul Marcarelli (above) in 2016. He is famous for asking ‘Can you hear me now?’

U.S. District Judge Victor Marrero did not agree to the date yet, saying any trial date will depend in part on what the Justice Department does.

The judge said he wasn’t ready to hear debate on issues raised by the lawsuit, but he told lawyers to be prepared to explain later how such a big deal survives a presumption that it would increase antitrust behaviors. He also wants to know how it would affect competition in rural areas.

Steven Sunshine, a Sprint attorney, told Marrero that it’s believed that a Justice Department decision is imminent and is likely to be in line with what the Federal Communications Commission was doing.

In a release, Minnesota Attorney General Keith Ellison said the merger will make it harder for people in Minnesota ‘to afford their lives.’

‘When Minnesotans and Americans everywhere are already struggling to afford their lives, more market consolidation is the last thing they need,’ he said.

Massachusetts Attorney General Maura Healey said the state’s yearlong investigation of the proposed merger concluded it would give the new company the power to raise prices, significantly reduce competition for customers and cost thousands of retail workers their jobs.