Quantum computer company D-Wave Systems Inc. aims to help companies to build and run what it calls “quantum-classical hybrid applications” with the launch today of a new open-source hybrid workflow platform that leverages its most advanced systems.

The platform is called D-Wave Hybrid, and is being made generally available as part of the Ocean software development kit within its cloud services. The idea is to provide simplified workflow controls for developers to build apps that can run on classical and quantum computers simultaneously in order to take advantage of each systems’ unique capabilities.

Murray Thom, vice president of software and cloud services at D-Wave, told SiliconANGLE this will be important because quantum computing applications will never run entirely on those platforms, and there will always be a need for classical systems to perform some computing tasks.

“Quantum and classical computing are complementary, and each has different strengths for running algorithms and applications,” Thom said.

He explained that hybrid computing works by breaking down problems into their component parts. Some of these problems can be solved more efficiently with classical computers, he said, while others are better suited for quantum computers.

Once these individual component problems have been solved, D-Wave combines the results in post-processing to deliver answers that neither a classical or quantum computer could provide by working alone.

“Think of it this way: While air travel has transformed the way we travel long distances, we still need cars to take us to our front doors,” Thom said. “Likewise, we will still need our laptops and familiar programming languages in the era of quantum applications.”

To stress that point, Thom cited the case of D-Wave customer Recruit Holdings Co. Ltd., which has built a prototype hybrid app based on D-Wave Hybrid that relies on data from smartphones and databases to optimize ad placement.

“While the quantum computer handles the hard problem of optimizing click-through-rate prediction, classical resources do everything else, from getting user data and communicating with servers, to displaying results,” Thom said. “This example of a quantum-classical hybrid workflow is similar to how central processing units in laptops outsource compute-intensive graphics-display processing to a graphics processing unit.”

Thom said the D-Wave Hybrid workflow platform is being made available as a cloud service through D-Wave’s Leap quantum system access and Quantum Application Environment, which provides access to the D-Wave 2000Q family of systems and various resources, including learning tools, and community and technical forums to foster collaboration. The system works by incorporating logic to distribute various computing tasks between classical and quantum systems according to whichever is more appropriate. 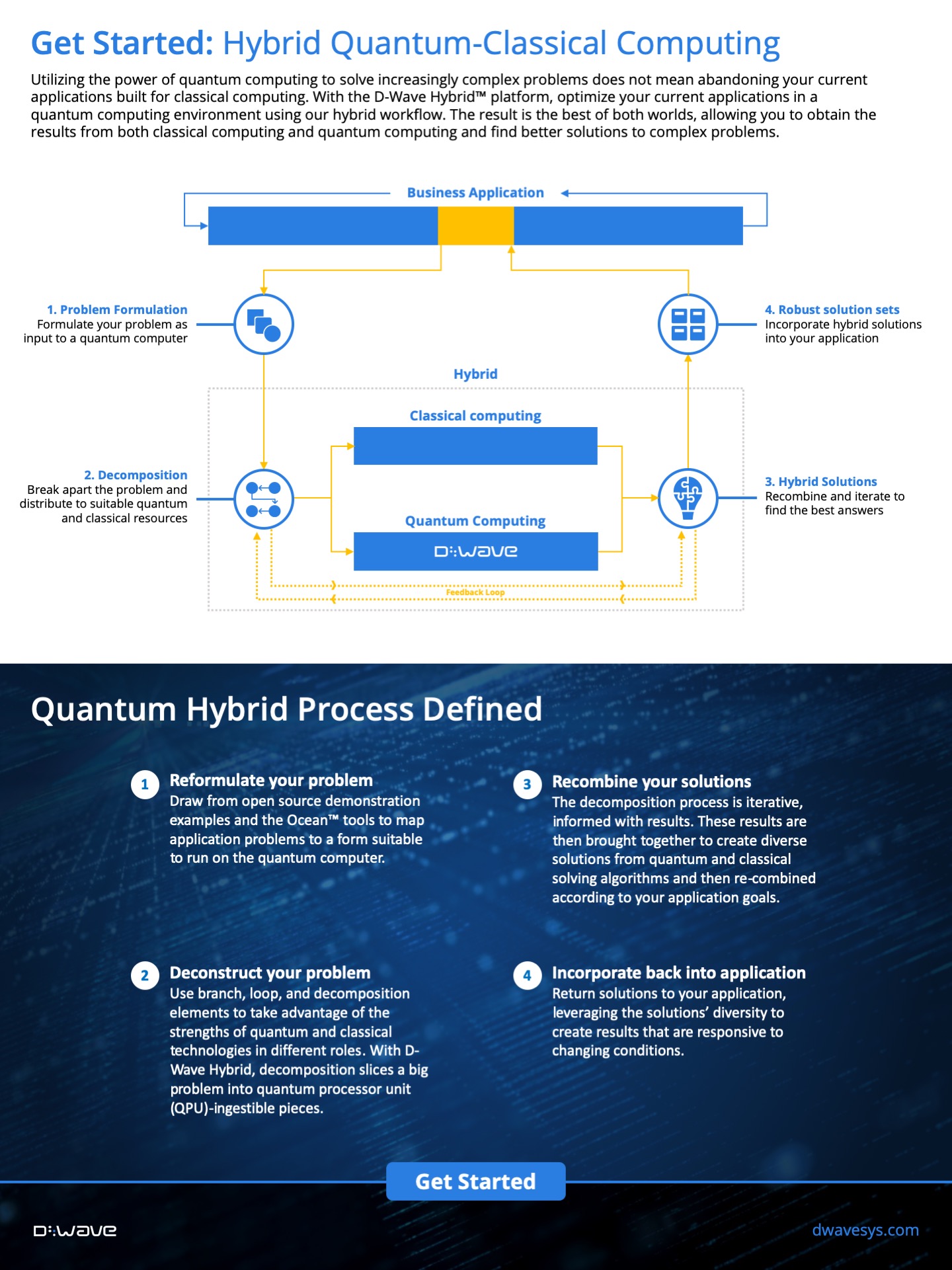 To make life easier, the system comes with a familiar coding environment for developers that’s based on the Python programming language. D-Wave is also providing a number of example hybrid workflows to help developers get started.

D-Wave said early adopters of the platform have already built more than 150 hybrid quantum-classical apps in areas such as automotive design, preventative healthcare and quantum chemistry simulation, many of which were showcased at its recent Qubits Europe 2019 conference. For example, German car manufacturer Volkswagen AG said it has used D-Wave’s platform to solve various business optimization problems with a hybrid quantum-classical approach.

“Whether it’s scheduling and logistics, production optimization, or intelligent mobility, difficult optimization problems need to be solved routinely and quickly,” said Sheir Yarkouni, a quantum computing researcher at Volkswagen’s Data:Lab Munich. “D-Wave Hybrid has allowed us to prototype these hybrid approaches much faster than before, and gives us the algorithmic control required to customize different parts to suit our needs. We can now scale our prototypes from small proof-of-concepts to more production-ready code, which we hope to use in our next traffic flow optimization project.”

Analyst Holger Mueller of Constellation Research Inc. said D-Waves’ new platform demonstrates that very few, if any, “pure quantum computing” use cases will emerge because such systems still need to be fed data from classical computers and return results to the nonquantum world.

“D-Wave is now trying to acknowledge that by offering a framework that allows developers to combine traditional compute with quantum compute,” Mueller said. “This is a valid and attractive value proposition, and it will be interesting to see how and when the rest of the quantum contestants chime in.”

… We’d like to tell you about our mission and how you can help us fulfill it. SiliconANGLE Media Inc.’s business model is based on the intrinsic value of the content, not advertising. Unlike many online publications, we don’t have a paywall or run banner advertising, because we want to keep our journalism open, without influence or the need to chase traffic.The journalism, reporting and commentary on SiliconANGLE — along with live, unscripted video from our Silicon Valley studio and globe-trotting video teams at theCUBE — take a lot of hard work, time and money. Keeping the quality high requires the support of sponsors who are aligned with our vision of ad-free journalism content.

If you like the reporting, video interviews and other ad-free content here, please take a moment to check out a sample of the video content supported by our sponsors, tweet your support, and keep coming back to SiliconANGLE.