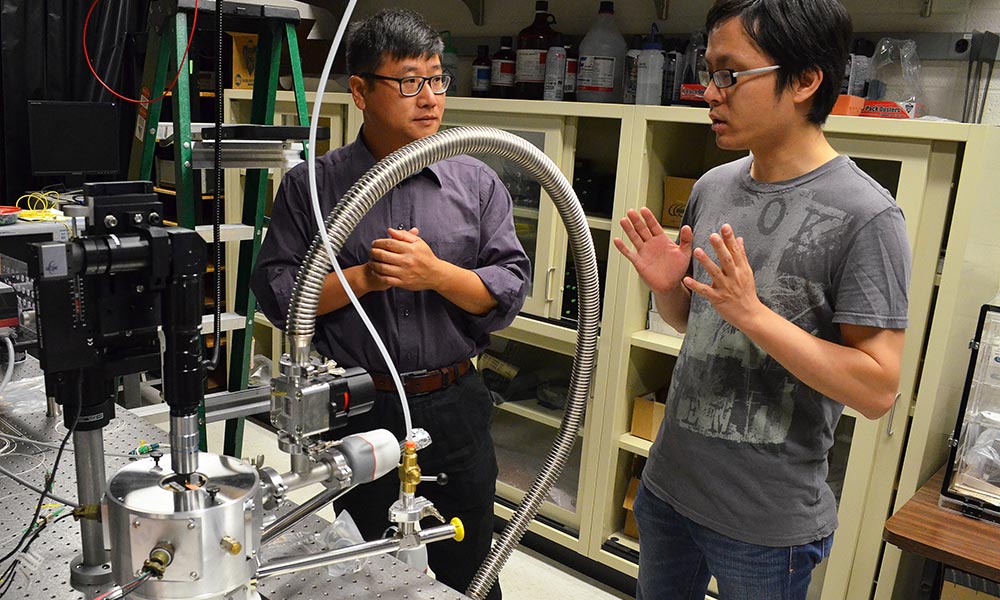 Qiang Lin, at left, assistant professor of electrical and computer engineering, and PhD student Wei Jiang, worked with researchers at the University of Victoria to show how the “optical spring” effect could enhance the detection of single particles and molecules. (University of Rochester / Bob Marcotte)

Qiang Lin, an expert in integrated quantum photonics and nonlinear nanophotonics at the University of Rochester, is a recipient of the Presidential Early Career Award for Scientists and Engineers (PECASE), the highest honor bestowed by the U.S. government on outstanding scientists and engineers beginning their independent careers.

Lin, an associate professor of electrical and computer engineering, studies the fundamental physics of light and its applications, including secure communication and advanced computing. He was among 309 recipients announced recently by the White House.

Recipients of the PECASE awards, which were established by President Bill Clinton in 1996, are selected for their pursuit of innovative research at the frontiers of science and technology and their commitment to community service as demonstrated through scientific leadership, public education, or community outreach.

Lin’s work in integrated quantum photonics is aimed at reducing the complexity and increasing the capacity of quantum information processing for secure communication, metrology, sensing, and advanced computing. For example, he is the principal investigator of a National Science Foundation-funded project with collaborators at University of Chicago, Case Western Reserve University, and MIT to explore and develop chip-scale multifunctional integrated quantum photonic processors. The processors would interface seamlessly with fiber-optic quantum channels for secure communication and distribution of quantum information between quantum nodes. His lab is also working on “extreme nonlinear photonics” that aim to use only photon-level energy  to realize efficient and high-speed logic gating, optical switching, wavelength routing, and circuit reconfiguration, which are crucial for future classical and quantum networks.

Lin, who earned his PhD from the University’s Institute of Optics in 2006, joined the faculty in 2011. He received an NSF CAREER award in 2013.  In 2014, he was named the inaugural recipient of the Leonard Mandel Faculty Fellow, which recognizes exceptional achievement by a junior faculty member in coherence and quantum optics. He was named a fellow of the Optical Society (OSA) in 2018 for “outstanding and sustained contributions to the research and development of nonlinear fiber optics, silicon photonics, nano-optomechanics, and integrated quantum photonics.”