Latest News
Home /10 Cambridge-based startups to look out for in 2019 and beyond (via Qpute.com) 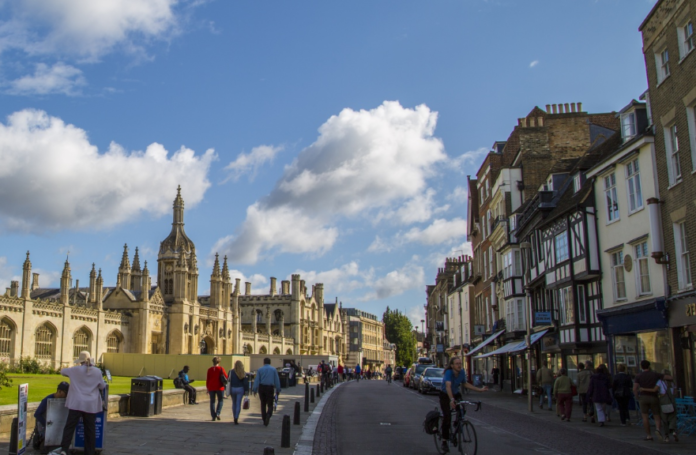 The University of Cambridge has developed a reputation for spinning out high-tech startups, and thanks to its world-class science research and innovation programmes, the city is emerging as one of the top hubs for tech companies in the UK, and even Europe. Academics from the university have a long history of joining tech startups, while giving back to academia. After Harvard, Cambridge boasts the greatest number of Nobel laureates in the world, well-represented across the fields of physics, chemistry, and medicine.

Hence, the city is home to many deep tech startups on the cutting edge of verticals such as medtech & biotech, semiconductors, and quantum computing. According to research by the Digital Economy Council, over half of Cambridge’s population now works in the technology sector. At the southern tip of the English Fenland, it’s even been dubbed ‘Silicon Fen‘.

According to Tech Nation’s 2018 report, Cambridge had double the digital tech turnover per staff (£152k each) compared to the average UK average of £99k. The same report from 2019 shows that Cambridge comes second (after London) for tech investment in the UK, with £583 million raised in 2018, and research by Global University Venturing found that the University of Cambridge raised the highest capital investment from its spinout companies amongst the world’s universities.

Here are 10 of the most exciting tech startups that were more recently coming out of Cambridge’s Silicon-Fen:

Healx’s mission is to improve the lives of rare disease patients by using groundbreaking AI and machine learning technology alongside pharmacological expertise to accelerate the discovery and development of treatments at scale. Healx repurposes and combines existing drugs to find new treatments to alleviate the suffering of the 350 million people globally that are affected by rare diseases. Healx is revolutionizing the conventional drug discovery model, claiming to cut typical development timelines by 80% and reduce costs by 90%. In 2018, Healx raised $10 million in Series A funding. Prior to Healx, CEO and co-founder, Dr Tim Guillams, obtained his PhD at the University of Cambridge in the field of Biophysics and Neuroscience, developing nanobody technology for Parkinson’s disease. He is also the Co-Founder and Trustee of the Cambridge Rare Disease Network (CRDN).

PROWLER.io has combined three different branches of mathematics to create the world’s first AI platform for general purpose decision-making. The startup’s core platform, VUKU, is designed for autonomous decision-making in complex, dynamic, and uncertain environments including financial markets, resource allocation, transportation and logistics, ridesharing, smart cities, and robotics, and is developing its capabilities to expand its applications into even more verticals. PROWLER.io believes that by 2025, principled decision-making using autonomous AI agents will drive the world economy. Founded in 2016 by mathematicians and engineers following years of research, PROWLER.io already employs over 100 people from 27 different countries, and has raised €35.1 million to date.

Techspert.io has developed a search engine capable of finding experts across the globe available to answer complex questions for businesses on subjects ranging from rare diseases to the development of sustainable fuels. The startup takes a company’s specific need for expertise and ranks relevant experts across the world quantitatively on their experience, communication, influence, and commercial insight. Clients are offered a shortlist of experts, with clear data on why each was selected, and can arrange contact and payment through the platform. Founded in 2016, techspert.io raised €1.1 million in December 2018.

Riverlane – Once quantum computers become a fully functional reality, overcoming the hurdles of noise and cryogenic temperatures, their increase in speed is expected to give them the ability to solve seemingly impossible problems in fields from chemistry to astrophysics. Riverlane is developing quantum software for use as a simulation engine to replace expensive laboratory tests in areas such as materials design and drug discovery. Riverlane’s software leverages the capabilities of the quantum computer in the same way that graphics processing units (GPUs) accelerate machine learning workloads, to accelerate the simulation of quantum systems. Founded in 2017, Riverlane just raised a €3.7 million round in June.

Qkine – Stem cells are revolutionizing medicine by enabling new approaches for disease modelling, precision medicine, and the development of new therapeutics. Qkine tackles challenges in protein production for stem cell biology, manufacturing high quality growth factors to improve the development of stem cells for regenerative medicine applications. A spin-out of The University of Cambridge, Qkine uses proprietary technologies and protein engineering techniques to produce growth factors and cytokines that are needed to produce high quality stem cells. Qkine’s technology addresses challenges to stem cell growth such as structural heterogeneity, poor stability and solubility, and spurious interactions with other biomolecules. Founded in 2016, Qkine raised €660k in June from existing investors including the University of Cambridge Enterprise and angels.

Cambridge-based PredictImmune develops prognostic tests to guide treatment options and improving patient outcomes for immune-related diseases such as inflammatory bowel disease (IBD), Crohn’s disease, and lupus. Based on over ten years of research at Cambridge University, PredictImmune has developed a simple blood test for Crohn’s disease and ulcerative colitis to accurately identify patients who are at risk of experiencing severe, relapsing disease and could benefit from certain biopharmaceutical interventions. Founded in 2017 as a spin-out of Cambridge University, the startup recently raised €11 million in Series B funding.

Agile Analog – Analog circuits are needed on every chip to interface between the real world and the digital processor – from sensors to battery connections to radio frequency data transmission. And with the explosion of the IoT the demand for new analog chip designs has never been greater.  But analog design is still slow and largely manual, and it is often the bottleneck in bringing new systems to market. Agile Analog was founded in 2017 to accelerate the pace of chip innovation by providing smaller, cheaper, more reliable, and lower power analog chip designs. Agile’s AI-driven platform replaces the existing manual design process, which has not fundamentally changed in 60 years. In May 2019, Agile Analog closed a pre-Series A funding round of €4.5 million to transform the semiconductor industry.

Entomics – 1.3 billion tonnes of food is wasted annually. Not only is this a waste of resources – food waste is a major contributor to climate change, emitting 3.3 gigatonnes of greenhouse gases globally. Entomics is solving this problem by farming insects to eat rotting food waste, metabolizing it into fats and proteins. In turn, the insects can be turned into food themselves for fish and animal feed, replacing products like soy, the cultivation of which causes widespread deforestation. Founded in 2015 by a group of students at the University of Cambridge, Entomics has raised €1.9 million to date, including an $800k seed round in April.

Conundrum AI uses machine learning for industrial applications, including to predict and explain failures of equipment to prevent downtime and decrease maintenance costs; predict, detect and explain quality issues in real time during production quality control; and to optimize production. The startup currently focuses on industries including pulp and paper, metals and mining, oil and gas, chemicals, and pipes manufacturing. Founded in 2017, the startup raised $1.5 million from Austria-based Speedinvest in February of this year.

VividQ is a deep tech startup making 3D holography a reality, developing software that enables commercial applications of holographic display in AR/VR headsets, smart glasses, automotive head-up displays, gaming, and consumer electronics. Overcoming the lack of depth perception – a key problem in AR/VR immersion – its displays offer an absorbing 3D experience without the need for optical tricks. Founded in 2017, VividQ’s co-founders include engineers, mathematicians, and computer scientists from the University of Cambridge, Oxford, and St. Andrews. The startup raised €580k from London-based Sure Ventures in April.

By the way: If you’re a corporate or investor looking for exciting startups in a specific market for a potential investment or acquisition, check out our Startup Sourcing Service!