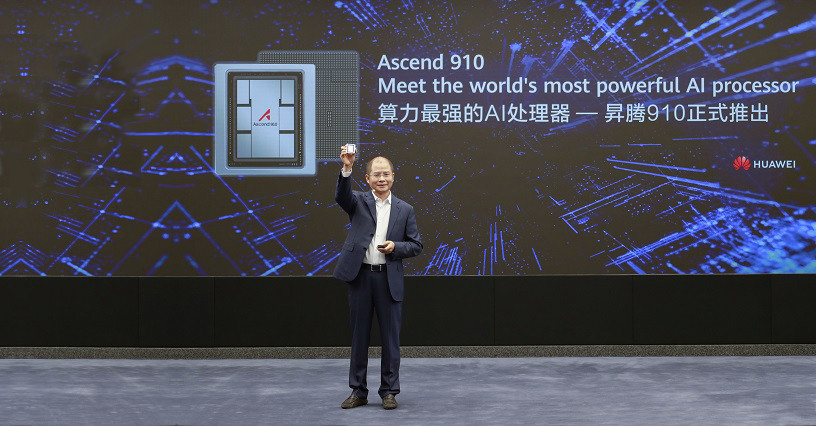 Huawei today officially launched what it is calling “the world’s most powerful AI processor” – the Ascend 910 – as well as an all-scenario artificial intelligence (AI) computing framework, MindSpore.

The launch event was broadcast live this morning.

“We have been making steady progress since we announced our AI strategy in October last year,” said Eric Xu, Huawei’s rotating chairman.

“Everything is moving forward according to plan, from R&D to product launch. We promised a full-stack, all-scenario AI portfolio. And today we delivered, with the release of Ascend 910 and MindSpore. This also marks a new stage in Huawei’s AI strategy.”

It notes that the growth of the global AI chip market is driven by increase in demand for smart homes, development of smart cities, and emergence of quantum computing.

The Ascend 910 is a new AI processor that belongs to Huawei’s series of Ascend-Max chipsets. Huawei announced the processor’s planned specs at its 2018 flagship event, Huawei Connect.

After a year of ongoing development, test results now show that the Ascend 910 processor delivers on its performance goals with much lower power consumption than originally planned, the Chinese tech company says.

It notes Ascend 910’s maximum power consumption is 310W, much lower than its planned specs (350W).

“Ascend 910 performs much better than we expected,” said Xu. “Without a doubt, it has more computing power than any other AI processor in the world.”

Ascend 910 is used for AI model training. In a typical training session based on ResNet-50, the combination of Ascend 910 and MindSpore is about two times faster at training AI models than other mainstream training cards using TensorFlow.

Moving forward, Huawei says it will continue investing in AI processors to deliver more abundant, affordable, and adaptable computing power that meets the needs of a broad range of scenarios (eg, edge computing, on-vehicle computing for autonomous driving, and training).