Ilias Perakis commissioned an image to convey his terahertz-driven superconductivity. 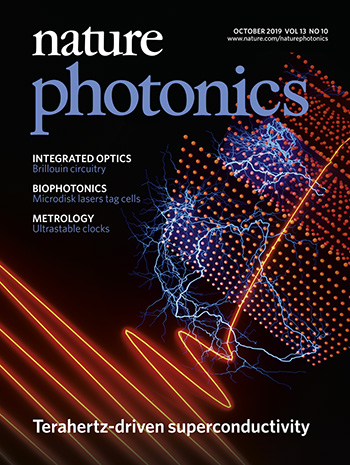 Used with permission of Springer Nature.For his fifth paper published in a Nature Research journal since 2015, Ilias Perakis, Ph.D., had a bonus that many researchers yearn for. The front cover of Nature Photonics featured his illustration of terahertz-driven superconductivity, the topic of his research paper inside.

The image shows a wavy orange-red line — a laser pulse with a frequency of a thousand-billion cycles per second — hitting a target material made of niobium and tin. Inside the material, the shape is distorted and breaks the symmetry by accelerating the electrons in the preferred direction of the electric field. With this comes an amazing change — momentary superconductivity with a disappearing quantum energy gap.

“Normally, every electron in a material behaves independently of each other,” said Perakis, professor and chair of the University of Alabama at Birmingham Department of Physics, in the UAB College of Arts and Sciences. “Our applied pulse accelerates the electrons in one direction, into a new superconducting state with zero resistivity, where the electrons behave as a whole.”

Why an interest in such research? The dream of quantum computing, new machines that can operate at speeds vastly faster than supercomputers. Making such devices is a challenge. 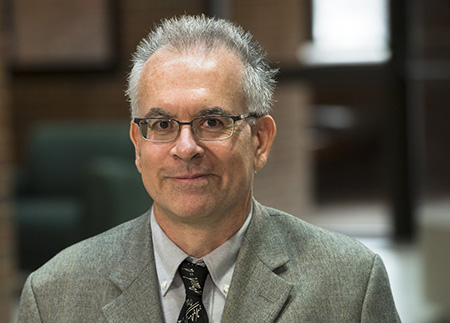 Ilias Perakis, Ph.D.For the Nature Photonics cover, Perakis commissioned the Ella Maru Studio of South Carolina. “We want to combine the arts with the science,” Perakis said, “so that we can understand the concept. Reasoning in the quantum world requires imagination, and art helps you with that.” Ella Maru specializes in scientific design and animation.

Perakis was named chair of UAB Physics in 2015. He says the department’s five undergraduate major concentrations place an emphasis on excellence and on using critical thinking and systematic analysis to understand complex phenomena and solve today’s interdisciplinary scientific problems.

“We personalize education to graduate a diverse group of students with well-developed complex skills and hands-on research experiences, who are well-connected to industry and well-prepared to serve a fast-changing and technology-driven global society,” Perakis said.