Today, Accenture published a study showing that disruptive technologies such as blockchain and AI are the fastest growing pain points for risk managers of financial firms.

The sixth edition of the “Accenture 2019 Global Risk Management Study” was published by the consultancy firm after surveying almost 700 risk management executives at banks, insurance companies and capital markets firms around the globe.

About 72% of the participants said complex risks were emerging faster than ever before. Moverover, many risks are not interconnected making them tough to manage. Risk managers said they were most concerned that adopting AI, blockchain, and robotic process automation (RPA) will have unintended consequences.

These disruptive technologies are new and developing at a fast pace. About 95% of risk managers said they were not fully capable of assessing risks of blockchain adoption. The figure matched that for Quantum computing. On the other hand, 89% of the respondents said the same about AI. 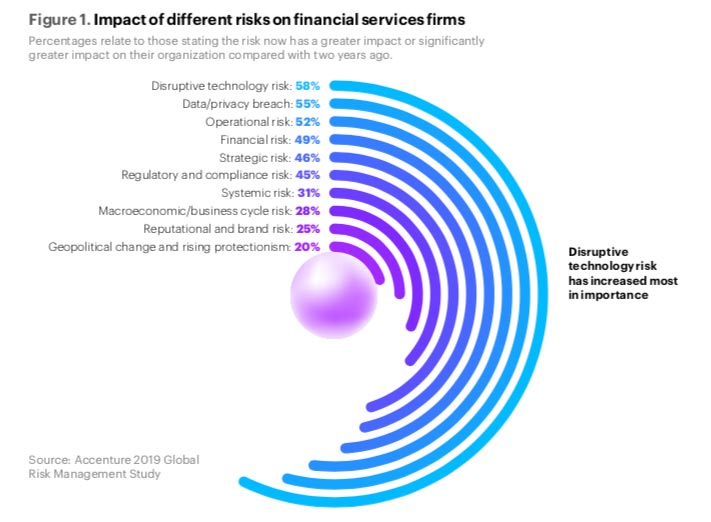 Despite the concern about assessing the risk, the exposure to disruption by technology is massive. That was the fastest-growing concern in the last two years, up by 58%. However, the possibility of technology disruption still only ranks third overall, up from sixth two years ago. The number one concerns remain systemic risk and macroeconomic risks. Uncertainty about tech disruption now ranks higher than geopolitical/protectionism risks.

The study also assesses numerous industries in terms of vulnerability to disruption. Insurance, banking and capital markets were the top three sectors in that order.

Meanwhile, about 52% of the respondents acknowledged that their current risk assessment function was only somewhat useful.

The study found that those firms that adopt smart technologies are more ready for risks. For example, 73% or risk functions that use machine learning are satisfied with their progress. In contrast, amongst those not using the technology, satisfaction is only 45%.