Quantum computing has the potential to revolutionise the processing power at our fingertips, but for the moment a lot of it is just potential.

Researchers have been uncertain on whether we’ll ever be able to harness quantum computing in a practical, affordable, realistic way. But we might have an exciting new lead.

Today’s quantum computers are, strictly speaking, just scaled-down, prototype versions of what we one day hope quantum computers can be. They require a lot of delicate instruments, exotic materials, careful engineering, and specific conditions in which to operate; you can’t just order a laptop version for your home. 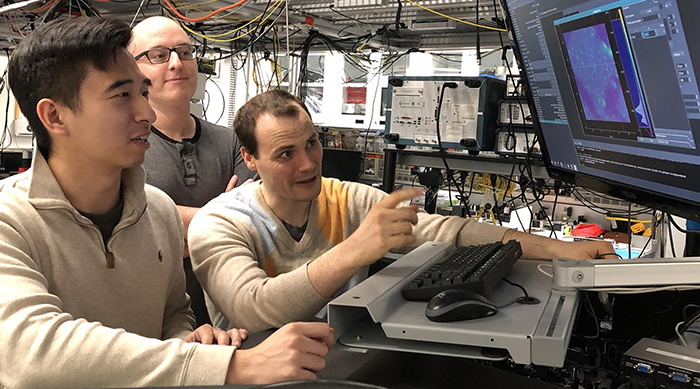 The researchers at work. (David Awschalom)

What these new studies show is a potential way to bring parts of the quantum computing promise to the electronics that are already in use – although as ever in the quantum realm, there’s still a lot of uncertainty.

“The ability to create and control high-performance quantum bits in commercial electronics was a surprise,” says molecular engineer David Awschalom, from the University of Chicago.

“These discoveries have changed the way we think about developing quantum technologies – perhaps we can find a way to use today’s electronics to build quantum devices.”

The scientists were able to generate quantum states in silicon carbide that emitted single particles of light, with a wavelength near the telecommunications band. That means our current network infrastructure might not need too much tweaking to carry quantum information.

In the first study, the scientists created what they called a “quantum FM radio”, capable of sending quantum information across long distances with high levels of control.

For their second trick, the team used a basic electronics element called a diode to free a quantum signal of noise and make it almost perfectly stable – addressing one of the major problems in quantum computing at the moment.

The diode acts as a one-way switch for electrons excited by the lasers used in the course of quantum experiments, effectively removing the electrons from the system and making the environment much less noisy.

As promising as they are, these advances aren’t going to put a quantum laptop on your desk anytime soon – but they do give scientists more hope that quantum computing through classical systems might one day become a reality.

In September we saw researchers creating something approaching a quantum computer which could operate at room temperature, and used modified versions of the components found in classic computers, so this is a research area that’s gaining momentum.

“This work brings us one step closer to the realisation of systems capable of storing and distributing quantum information across the world’s fibre-optic networks,” says Awschalom.

“Such quantum networks would bring about a novel class of technologies allowing for the creation of unhackable communication channels, the teleportation of single electron states and the realisation of a quantum internet.”

The research has been published in Science Advances and Science.