It’s written by Peter Schottenfels, a self-described Tech Newbie, and you can find it on the company’s blog. The expert he’s talking to is Brandon Barbello, Product Manager of Pixel.

Specifically, he looks at details of Google’s motion sensing radar technology – a feature called Motion Sense – which appears in the new Pixel 4 smartphone (where you can wave your hand to skip songs and snooze alarms – see Gadget Watch: Pixel 4 sets sail as new Google flagship phone).

The system is located at the top of Pixel 4 to sense small motions around the phone. It wraps some advanced hardware with software algorithms in order to recognise gestures and detect when you’re nearby.

Questions covered include how the phone senses something is near, how it recognises a particular motion as a swipe and not something else, and what happens after the antenna picks up the motion?

For example, when is a swap a swipe. Schottenfels explains:

With the motion sensing functions on the Pixel, Brandon and his team use machine learning to determine what happened. “Those radio waves get analysed and reduced into a series of numbers that can be fed into the machine learning models that detect if a reach or a swipe has just happened,” Brandon says.

“We collected millions of motion samples to pre-train each phone to recognise intentional swipes. Specifically, we’ve trained the models to detect motions that look like they come from a human hand, and not, for instance, a coffee mug passing over the phone as you put it down on the table.”

Of course, there’s lots more to come in this are. Motion sensing will provide the basis for future phone functionality…

“Brandon told me that he and his team plan to add more gestures to recognise beyond swiping, and that specific movements could be connected to more apps. “In the future, we want to create devices that can understand your body language, so they’re more intuitive to use and more helpful,” he tells me.” 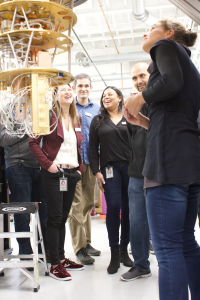 I really like this series from Google – I highlighted a previous one on quantum computing. See – A bluffer’s guide to quantum computing, which gives some interesting g details on the likes of qubits and how they can be stored and how manipulated.