‘Quantum computers’ were just a well-thought-out futuristic concept that became a reality with Google announcing quantum supremacy in October 2019. CEO of Google, Sundar Pichai, gladly said that Google’s AI team has managed to achieve a quantum supremacy of sort with a chip they developed. This chip performs the target computation in 200 seconds which would take even the fastest supercomputer close to 10,000 years. Following suit, many companies are applying for quantum computing patents.

A bubble of anticipation and excitement in the IT industry evolved as the capabilities of quantum computing began to be explored. Quantum computers are expected to help solve some of humanity’s most complex challenges which current computers are not able to breakthrough.

Read: Modern Encryption To Be Vulnerable To A Powerful Quantum Computer

Why are companies working towards quantum computing?

The areas of healthcare, smart materials, environmental systems, energy, fintech, and cybersecurity will see remarkable development with quantum computing. Since quantum computing will promise faster data analysis a lot of time-sensitive companies can rely on it for faster assessment and decision making. Along with this, there is the race to quantum supremacy that most tech giants are waiting to achieve. This achievement will help them create a new ecosystem of competition, giving them an edge over their existing competitors.

Which are the tech giants already working towards this? Here is what RS Components report says about companies working to advance their technologies with the most patent applications!

It’s not just Google-IBM, Microsoft, Intel, and others are all looking at how to advance the technology. But which companies are working the hardest with the most patent applications and has there been an increase in interest over the years?

After an analysis of 5000 patent applications, RS Components discovered this: 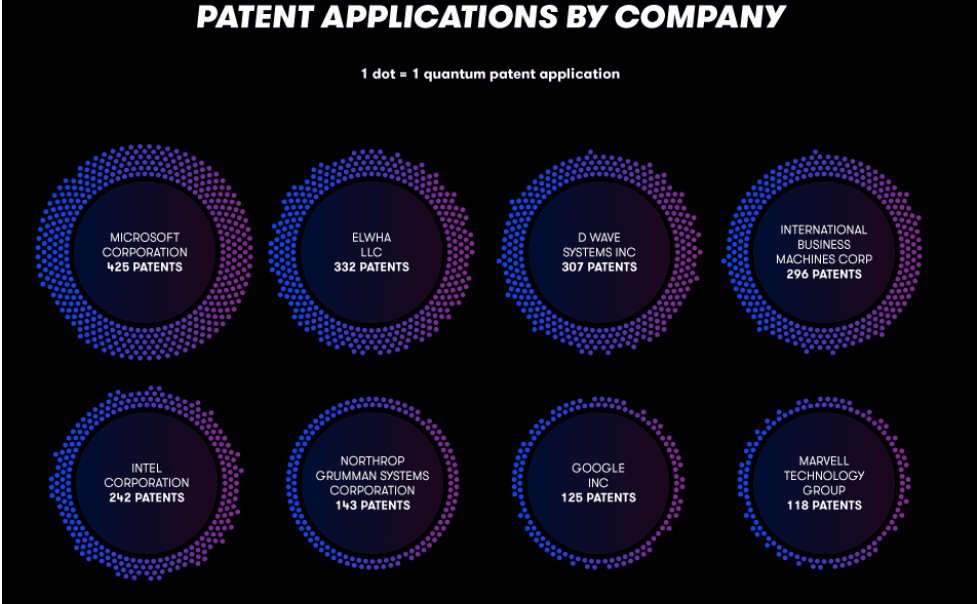 Over the past 10 years, applications have increased from 12 to 558 in 2018 which has been a steady increase and is expected to see a further rise.

Microsoft gets the most number of patent application filings!

Leading the way with 425 applications, their dedicated ‘Quantum’ team is working to build a scalable quantum system to solve the world’s most complex challenges. They introduced the “Azure Quantum” which is a full-stack, open cloud ecosystem that will bring the benefits of quantum computing to people and organizations across the world. The program will be tracking users about quantum computing through a series of tools and coding against simulators and quantum hardware.

Other companies also in the race? IBM comes close with 296 patents, Intel with 242 patent applications and Google with 125 patents. IBM and Amazon are already working on implementing quantum computing as a service for their cloud services.

What are the challenges these companies will have to overcome?

Coping up with the lightening speed of technological advancements and changes would be the biggest challenge for IT companies. There are not many quantum engineers and upskilling your workforce would take time. Most companies would have to cross this hurdle of resource deficiency and continue to upgrade simultaneously.

As fascinating as it sounds, quantum computing would require a lot of effort and resources to begin sailing. There has already a significant investment by companies in this field, close to $1 billion which means quantum computers will come into being in a comparatively near future.

If you have an interesting article / experience / case study to share, please get in touch with us at (email protected)