Latest News
Home /The Future of Humanity is all about searching for life across the universe (via Qpute.com) 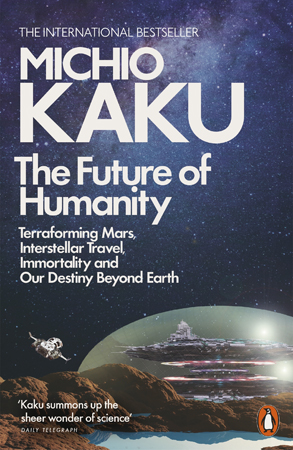 Michio Kaku, a theoretical physicist by profession, divides his book The Future of Humanity into three distinctive parts.

They are Leaving the Earth, Voyage to the Stars and Life in the Universe.

He explores the speculative concept of seeding new universes. He asks, ‘What if our universe dies and we have to adapt before moving on to another one to continue living our life?’ Such concepts may be far-fetched but they can be questioned. The Future of Humanity dwells on such a hypothesis and Kaku has done a fine job explaining his views. From Kaku’s perspective, the book deals with human development. This is where fact meets fiction. However, this fiction is based on the scientific research man conducted over the years and the equipment he developed that was once a distant dream.

Kaku grips the readers’ attention from the introduction part of this book. He begins the introduction by referring to a book by Isaac Asimov that he read as a child. Asimov asks, “Where will human civilisation be 50,000 into the future?” Asimov later suggests that humans will be scattered across the Milky Way with the hundreds and thousands of inhabited planets being governed by a Galactic Empire. Kaku also gives references to science fiction stories, novels and television shows and how these fictional ideas presented – in the craziest way – could be a reality hundreds of years into the future. Kaku ends the introduction with these words, “As the old Chinese proverb says, the journey of a thousand miles begins with the first step. The journey to the stars begins with the very first rocket.”

Kaku grips the readers’ attention from the introduction part of this book. He begins the introduction by referring to a book by Isaac Asimov that he read as a child. Asimov asks, ‘Where will human civilisation be 50,000 into the future?’ Asimov later suggests that humans will be scattered across the Milky Way with the hundreds and thousands of inhabited planets being governed by a Galactic Empire

While reading the chapters of this book, you will feel like a child all over again. Kaku’s narrative and writing prowess make you question the concepts and theories he presents. While the writing style itself is smooth and easy-to-understand, the flow of information Kaku shares is effortlessly simple to grasp.

Kaku gradually explores all of the human’s scientific and technological advancements during the last five to seven decades. He touches upon self-replicating robots and artificial intelligence; quantum computing and space travel. He explains that scientific revolutions arrive in waves. He said that the physicists who pondered upon and discovered the theory of thermodynamics and mechanics made way for the humans to enter into the first wave of this revolution. It is certainly true because it led to the development of the steam engine that later sent humans into the industrial revolution. The second wave emerged during the twentieth century. Those who understood the laws of magnetism and electricity led to this wave. Kaku says that the human space program was fuelled by the second wave for it gave the gift of electricity to the world. The third wave, however, came during the 21st century. The physicists working in the domain of quantum physics instigated it. He believes that the internet, GPS and computers were conceived and created because of advancements made in quantum physics. The fourth wave is that of artificial intelligence, biotechnology and nanotechnology while the fifth wave will be about laser sails, nanoships and ramjet fusion machines.

During the first part of the book, Kaku presents the idea to colonize Mars and to construct a moon base. Here, the conceptions of AI and technologies from the twenty-second century will facilitate man to achieve its dream to live on another planet. During the second part, he enters into a more fictional narrative of space exploration. However, he claims that the fifth wave technologies will make this possible. The third part of the book is an extension of the concepts and theories Kaku presents in the previous part. He argues that man needs to genetically engineer himself to survive during deep space travels.

Kaku begins the first chapter, ‘Preparing for Liftoff’ with an inspirational incident. He writes, “On October 19, 1899, a seventeen-year-old boy climbed a cherry tree and had an epiphany. He had just read HG Wells’s War of the Worlds and was excited by the idea that rockets could allow us to explore the universe. He imagined how wonderful it would be to make some device that had even the possibility of traveling to Mars and had a vision that it was our destiny to explore the Red Planet. By the time he came down from that tree, his life had been forever changed. That boy would dedicate his life to the dream of perfecting a rocket that would make this vision a reality. He would celebrate October 19 for the rest of his life. His name was Robert Goddard, and he went on to perfect the first liquid-fuelled multistage rocket, setting into motion events that changed the course of human history.” The Future of Humanity is certainly an interesting read to stimulate your brain cells. It compels you to ask all the “what if” questions about our future.

The writer is an independent researcher, author and columnist. He can be reached at [email protected] and Tweets at @omarifikhtar