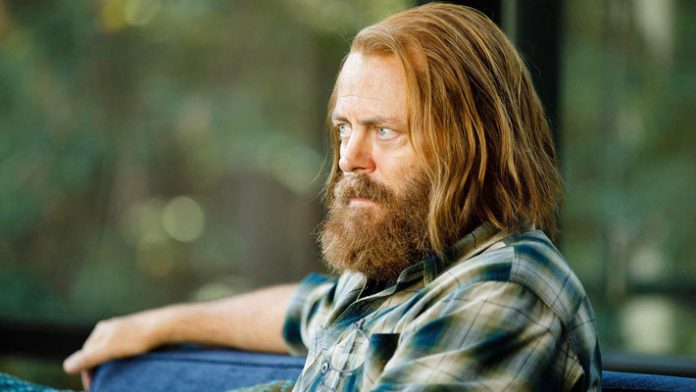 Alex Garland‘s ‘Devs,’ starring Nick Offerman and Sonoya Mizuno, has launched as FX on Hulu’s first original series. The sci-fi show oozes futuristic paranoia and pairs a beautifully frightening aesthetic with charismatic performances, all of which bring a disturbing parable to life. Here, we’ll break down the show’s many mysteries as the season unfolds around the works of a tech CEO with a possible messianic complex.

Devs begins as a riveting watch with Nick Offerman’s portrayal of Forest throwing out loads of ambiguity last week. He seems like a bad guy, right? He watched Sergei get murdered by Kenton the fixer and justified that this was predetermined, so no big deal. Forest didn’t seem like he wanted Sergei dead, simply that he accepted that it must be done due to his apparent act of corporate espionage and betrayal. However, he didn’t do anything to stop the horrifically monstrous act done in his name. Well, Devs takes a breather after all that intensity for a comparatively low-key episode. Not much happens, but what does happen sets up the future, albeit in a confusing way.

For starters, Forest didn’t kill or condone the killing of anyone this week. That seems like an unusual thing to herald, but hey, progress. He even stepped in to “save” Lily’s life when she appeared to be suicidal. He also didn’t murder more leafy greens, and now I’m being silly, but seriously, Forest is a complicated guy. We saw how emotionally tortured he was at the end of last week while watching the Devs machine render the likeness of his late daughter. His red-rimmed eyes on various occasions in the premiere only hinted at his complexity, and this week, Forest takes on a largely benevolent air.

That’s quite a use for such a high-tech, sophisticated machine, yes? Prior to that, we also saw images of historically valid moments like Joan of Arc being burned at the stake, caveman art, and Abraham Lincoln’s Gettysburg Address. Much closer to the present, there’s a flash of Lily sending her “f*ck you message” to Anton after Sergei’s death, and that suggests two interesting questions: (1) Why is Lily popping up in the machine’s renderings; (2) Exactly how much of a threat is she to the Devs group?

The second principle seems unachievable, but how about the first one? The back-forward stuff is clearly something that Alex Garland wants viewers to obsess over and question. Uncanny things happen over the course of the episode to hammer home that question, including this CCTV footage moment where Kenton’s seemingly shown walking backwards (unlike everyone else) at the scene where Sergei’s suicide was faked. Perhaps the footage was being played backwards — it’s pretty freaky.

Speaking of fakery, this is how Lily confirmed her suspicions about Sergei’s death: by taking a thumb drive loaded with files from Kenton’s computer and showing the footage of Sergei’s burning body to Jamie. He observed that some of the flames formed identical patterns, thereby proving that Sergei’s death was real, but his suicide was not. So, his murder was real.

Beyond that solitary revelation on Lily’s behalf, the episode focused on what she’s willing to do in order to expose truths and take down those who are seemingly most responsible — Forest and Kenton — for Sergei’s death. Her plan works in a sense because she does make strides at gathering evidence, but damn, if feels like these tactics are gonna come back to bite her. She does a decent job of convincing Kenton that she’s suffered from paranoid schizophrenia and is, once again, losing her grip on reality. Kenton, in turn, shows off his own gullibility.

So, why is Lily’s behavior potentially troublesome? Well, her fake histrionics (and faux suicide attempt) do serve a purpose, but I also wonder why she’s throwing herself under the bus like that. Couldn’t she and Jen have sneaked into Kenton’s office while he wasn’t there to steal the thumb-drive files? Instead, she’s marked herself and given Kenton more of a reason to take her out. One takeaway here, though, is that Forest tells Kenton that nothing harmful should happen to Lily. He even orders Kenton to talk her down from that five-story ledge, although he was at least partially motivated to save face in front of the visiting senator.

Like I said, this episode’s chock full of confusing moves and their corresponding motivations. We did, however, witness one unequivocal declaration from the Devs technology: Lee Harvey Oswald did, in fact, kill JFK on the Grassy Knoll. It’s kinda crazy that a show this full of paranoia takes a strong stance against a conspiracy theory, but that’s Devs: slightly confusing and always building toward the past-future.

Where Can You Use Quantum…