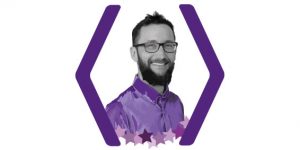 Peter Wittek disappeared in September 2019 when an avalanche hit their camp during an expedition on Mount Trishul. Peter was a researcher on quantum computing and quantum machine learning based in Toronto, and is dearly missed in the community.

Today, the 17th of March, would be Peter’s birthday. To celebrate his life, we publish the non-review article and testimonials by friends and colleagues. If you knew Peter and would like to add a few words about him, your friendship or collaboration, or his work and legacy, email us and we will add it to this post.

Peter and I joined the University of Toronto as assistant professors at the same time. I was very happy to find out that there would another junior quantum computing faculty member here, and when I met him in person I was even happier that, not only was Peter working in quantum computing, but he was a wonderful person. He is one of the few people I know who have this rare blend of kindness, humility, humour, but also ambition, vision, intellect, and endless energy. In just the couple of years that Peter has been here at the University of Toronto, he was making many exciting things happening in the quantum computing space, not just in terms of his research but more importantly he was building a vibrant community that fed off of his enthusiasm and optimism. I, and everyone else, was deeply inspired by his example.

On a more personal note, I am deeply saddened by the fact that we were supposed to continue a quantum machine learning project together after he came back from his trip. Although he isn’t around today, my collaborators and I are pushing the project forward; I hope that Peter would be proud of it.

As much as one may try, it is challenging to write even coldest factual sentences about Peter, without having the text sound like a cliche-filled laudation.

Peter Wittek was a pioneer and visionary in the field of Quantum Machine Learning. Certainly one of the first classical machine learning experts to recognize the potential of the synergy between quantum computing and machine learning, he had a vision of bringing classical ML and quantum computing communities to jointly explore this domain. His vision was also his calling, dedicated to ensuring quantum machine learning grows, consolidates and becomes *actually realized*. He has spearheaded virtually every aspect of the domain: scientifically, from developing new quantum-enhanced algorithms, initiating research lines in machine-assisted discovery for quantum systems, by initiating extensive outreach activities, and by co-initiating the largest spin-off incubator program connecting the academia with industry and real world impact. It is not an exaggeration to say that most individuals active in QML, in any function, have had a benefit in interaction with Peter.

On a personal note, I have known Peter since 2015; he was a friend, straight shooter and direct, driven and focused yet open to differing points of view, and above all willing to help. He left us pursuing his passion for mountaineering, where he knew the goal is not in reaching the heights themselves, but in the thrill of the climb, the associated struggle and teamwork. This spirit of wanting to strive is also what our community will continue to do, building on many of his pioneering ideas.

Peter and I met more than two years ago in sunny Benasque in 2017 and we have since, until his passing, worked and played closely together in 7 cities over 3 continents across multiple time zones. He was not only a great colleague, but also a very supportive and generous friend. He would always remind me a bit of Peter Pan, having that vitality of life and thirst for adventure, whether it’s creative exploration in research or spontaneously diving into chilly Lake Ontario, despite my persistent protests, to fetch a colony of bryozoa I found. Finally, I can imagine Peter smiling, on top of Everest, declaring that death itself would be another awfully big adventure.

His enthusiasm, playfulness and our endless arguing and laughing over the whiteboard would be greatly missed. We still have so many ideas together that we have not brought fully to light, but I’m grateful that our work combining security and quantum machine learning was completed before he left. Peter also often plays with new ideas on how to bring the community closer together and how to encourage the efforts of younger people. During my last visit to him in Canada, he told me of a wish for a scholarship scheme for students to conduct research in quantum machine learning. As far as I know this was no more than a casual thought at the time. Perhaps this is something we as a community can one day help bring to fruition.

With his inquisitive mind Peter has helped shaped this field like few others. Of all people I know Peter deserves most to be called a true cosmopolitan. He saw opportunities to connect where others could only see the gaps – in science and private life. Through his kind character and energizing attitude he has positively influenced the trajectories of many, including mine. You will be dearly missed, as a visionary, as a colleague, as a friend.