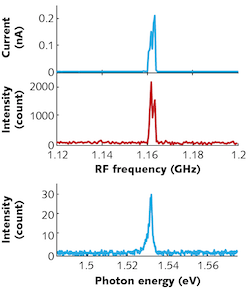 The amount of electrical current produced in a GaAs device as a function of the frequency of the surface acoustic wave (SAW) driving the LDW peaks at the 1.163 GHz resonant frequency of the SAW (top). At the point where the electrons cross an n-i-p junction in the GaAs, an LED is formed; the number of photons produced (intensity count) of the LED as a function of SAW frequency corresponds well with the electrical current (center). The energy spectrum of the electroluminescence from the LED has an energy peak at 1.531 eV with a full width at half maximum (FWHM) of 1 meV (bottom).

Researchers at the University of Cambridge (Cambridge, England) have developed a novel technique for generating single photons by moving single electrons in a specially designed light-emitting diode (LED) driven by surface acoustic waves (SAWs).1 Because electrons can, via their spin, form qubits for quantum computing, this technique, which is the first step in enabling quantum transfer by converting electron spin to photon polarization, could aid in the development of the emerging fields of quantum communication and computation.

Up to now, single-photon sources have been made in research labs from self-assembled quantum dots in semiconductors or from structural defects in diamonds. The formation of these dots and defects is a random process, so it is hard to predict the location and the photon wavelength of these single-photon sources. This randomness poses a challenge in integrating a source into a large quantum network. In contrast, the Cambridge researchers show that they can generate a single photon in a controlled way by moving only one electron at a time to recombine with an electron hole.

The LED, which is based on gallium arsenide (GaAs) and contains a 15 nm undoped GaAs quantum well, produces photons with an energy of 1.531 eV (a wavelength of 810 nm). The device was fabricated using only industry-compatible fabrication processes, notes Christopher Ford, the leader of the research team.

When driven by a SAW, GaAs, which is a piezoelectric material, forms what are equivalent to moving quantum dots formed by the strains produced by the modulation of the SAW; as a result, electrons are confined in the moving quantum dots. Under the proper conditions, a well-defined number of electrons is carried in each SAW potential minimum, leading to a quantized electrical current. If each electron is carried across a semiconductor n-i-p junction, then a single photon is created when the electron recombine with a hole. In other words, a propagating single-electron state is converted to a single-photon state.

The SAW, which takes the form of an interdigitated transducer (IDT) with an etched structure providing lateral confinement, is driven at a 1.163 GHz frequency—the resonance frequency of the SAW (see figure). The assembly is cooled to 1.5 K for the experiment. The LED is driven at a voltage bias just below the level for which the LED would normally produce light, so as a result, light only appears when another phenomenon assists the electrons—in this case, the electron-carrying SAW. The internal quantum efficiency of the device is about 2.5%; photoemission occurs periodically every 860 ps, corresponding with SAW frequency.

While quantized SAW-driven current was not observed in the prototype experimental device, photon antibunching, or a reduced probability of two photons arriving at the same time, was observed, with the amount of antibunching measured at 0.39±0.05 in the single-electron limit.

The next step for the researchers is to create single polarized photons by integrating spin-injection techniques with their device. In practice, each single photon would be given one of two polarizations to carry a message such that an eavesdropper would not be able to intercept the message without being detected.

In a further step, a superposition of electron spin states could be converted to a superposition of photon polarizations using a magnetic field in the device, and the reverse, allowing long-distance quantum information transfer between semiconductor spin qubits based in two widely separated quantum computers. By bridging semiconductor-based quantum computers in this way, the ambitious goal of building large-scale distributed quantum-computing networks could be achieved.