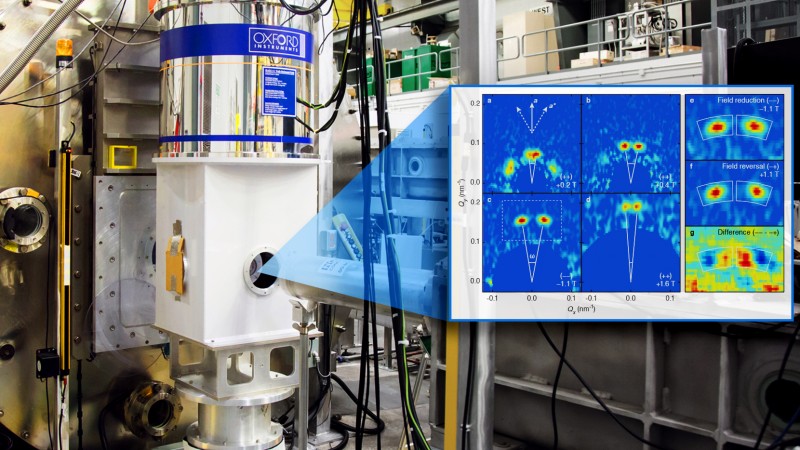 Researchers at the University of Notre Dame, in partnership with those at Northwestern University, are a step closer to understanding how superconductors can be improved for reliability in future quantum computers.

The team, led by Morten Eskildsen, professor in the Department of Physics at Notre Dame and William Halperin from Northwestern University, achieved a new discovery in the field of topological superconductivity. The materials are at the forefront of research in quantum computing and quantum sensing.

The team demonstrated in their paper, published in March in Nature Physics, that the superconducting compound UPt3 breaks time-reversal symmetry, where superconducting electrons spontaneously circulate around a specific axis within the crystalline structure of the material.

The researchers used neutron-scattering experiments completed at the High Flux Isotope Reactor at the Department of Energy’s Oak Ridge National Laboratory in Tennessee and at the Institut Laue-Langevin in Grenoble, France, to make the discovery, which had been predicted but had not been unambiguously detected before.

Topological properties of materials are being studied intensely because of their fundamental as well as practical importance, Eskildsen said. A classic example of topology is a Möbius strip that has only one surface and one edge. Here the “twist” is a robust feature that can only be undone by cutting the strip.

In solids, this concept is understood abstractly, referring to electronic properties that cannot be undone in a smooth manner. This provides what is known as “topological protection”, and is an avenue to increase reliability in novel electronic devices for quantum computation. Importantly, it is the understanding gained from the neutron scattering experiments, rather than the particular material, that will benefit the development of quantum devices.

The measurements were carried out at extremely low temperatures and high magnetic fields. The group looked at the properties of electric tornadoes or vortices in the material, and found a difference in their behavior depending on how the superconducting state was prepared. Specifically, their results show that the superconducting state in UPt3 can be assigned a chirality, or handedness, and that this can be controlled by suitable magnetic field protocols.

In addition to Eskildsen, key collaborators included Keenan Avers and James Sauls from Northwestern University, as well as researchers from Oak Ridge National Laboratory, Institut Laue-Langevin, and the Laboratory for Neutron Scattering and Imaging at the Paul Scherrer Institute in Switzerland.