IBM (IBM – Free Report) is scheduled to report its Q1 fiscal 2020 financial results after the closing bell on Monday, April 20. The historic tech power hopes to emulate the likes of Microsoft (MSFT – Free Report) as it transitions deeper into cloud computing. But the question is should investors consider buying IBM stock amid the coronavirus economic downturn?

IBM announced in January that Ginni Rometty would step down as CEO. New chief executive Arvind Krishna had already played a large role in shifting IBM’s focus to cloud, AI, and quantum computing.

Now the company hopes to expand its reach in the next-generation of technologies. This includes its $34 billion purchase of open-source software firm Red Hat, which officially closed in July 2019. 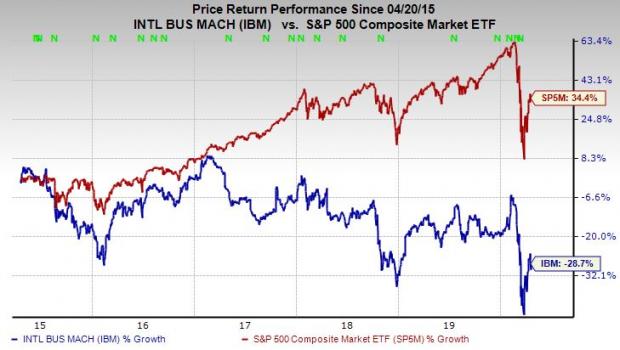 On top of that, the historic tech giant’s consensus Q1 earnings estimate has slipped nearly 13% in the last 60 days. This is part of a broader downward earnings revisions trend that helps IBM hold a Zacks Rank #4 (Sell) right now.

IBM stock is up over 22% since March 23 and its dividend yield rests at a strong 5.46%. However, investors can see that shares of IBM have fallen nearly 30% in the past five years. And despite IBM’s recent climb, its stock price has slipped 16% in the last 12 months.

This helps artificially inflate IBM’s dividend yield. Therefore, investors might want to wait for its guidance before they think about buying the historic giant that is still trying to navigate a big business transition.

Looking for Stocks with Skyrocketing Upside?

Zacks has just released a Special Report on the booming investment opportunities of legal marijuana.

Ignited by new referendums and legislation, this industry is expected to blast from an already robust $6.7 billion to $20.2 billion in 2021. Early investors stand to make a killing, but you have to be ready to act and know just where to look.