CHASING AFTER THE US:
China is scrambling to cut its dependence on the West for crucial components such as computer chips, an issue that has become more urgent

China pledged to boost spending and drive research into cutting-edge chips and artificial intelligence (AI) in its latest five-year targets, laying out a technological blueprint to vie for global influence with the US.

Beijing would also aim to get 56 percent of the country on faster 5G networks. 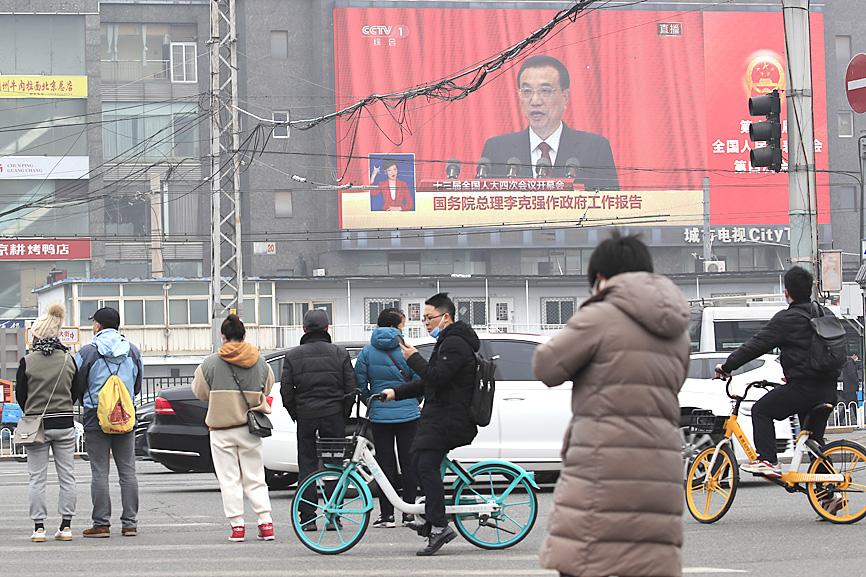 Nationwide research and development spending is to increase by more than 7 percent annually, which “is expected to account for a higher percentage of GDP” than during the previous five years, Li added.

China is quickly moving to cut its dependence on the West for crucial components such as computer chips, an issue that became more urgent after a global shortage of semiconductors worsened during the pandemic.

Beijing is also making big bets on emerging technologies from hydrogen vehicles to biotech, while looking to ensure that its own chipmakers can compete with the likes of Intel Corp and Taiwan Semiconductor Manufacturing Co (台積電). That encompasses a new emphasis on silicon design software and so-called third-generation chipmaking — two areas critical to Beijing’s drive to achieve technology self-sufficiency.

“Innovation remains at the heart of China’s modernization drive,” Li said in an address to the Chinese National People’s Congress in Beijing yesterday. “We will strengthen our science and technology to provide strategic support for China’s development.”

Li’s speech punctuated goals enumerated in China’s 14th five-year plan, also released yesterday, which prioritized advances in younger spheres, such as quantum computing, neural networks and DNA banks. The document enshrines a multi-layered strategy that is pragmatic and ambitious in scope, embracing aspirations to replace pivotal US suppliers and fend off Washington, while molding homegrown champions in emergent fields.

At stake is nothing less than the future of the world’s No. 2 economy. Beijing is moving swiftly, while US President Joe Biden’s administration escalates a battle against what it called “techno-autocracies.” That could extend or even expand blacklistings that banned key transactions with corporations from Huawei Technologies Co (華為) to ByteDance Ltd (字節跳動) and Tencent Holdings Ltd (騰訊).

To a country that imports US$300 billion of chips annually, a worsening global shortage drives home the risk of relying on potentially hostile suppliers for the building blocks of everything from AI to next-generation networks and autonomous vehicles.

It also pledged to develop its own advanced chip manufacturing technologies and key materials that comprise third-generation chips. The country aims to secure first-mover advantage in that nascent arena involving compounds such as silicon carbide and gallium nitride, as well as chips that can operate at high frequency, and in higher-power and higher-temperature environments, with broad applications in 5G radio frequency chips, military-grade radar and electric vehicles.

While specifics of that endeavor are not to emerge for months, yesterday’s documents provided important clues about the envisioned roadmap. That includes building more national laboratories and innovation centers, as well as ramping up efforts to implement a little-heard of program called the Sci-Tech Innovation 2030 Agenda.

Comments will be moderated. Keep comments relevant to the article. Remarks containing abusive and obscene language, personal attacks of any kind or promotion will be removed and the user banned. Final decision will be at the discretion of the Taipei Times.