PARIS — It’s a childlike wonder to discover how plants and animals are not just potatoes and cattle, but geniuses. The silk spun by a spider is 10 times stronger than Kevlar, yet fantastically stretchy. A lotus leaf is designed for rain and dirt to slide off so that photosynthesis can take place. The Morpho butterfly absorbs the sun’s rays, and the bear hibernates without losing muscle.

These natural wonders so long overlooked by humankind are now being closely observed by a wide range of scientists, engineers, doctors and investors.

Life on our planet has existed for more than 3.5 billion years, and nature, continually optimizing itself, has never stopped evolving. For the last two centuries, humans have been using technology to force nature to produce more food and more materials. Not without success, indeed, but also not without damage.

The concept of taking inspiration from nature, “bio-inspiration,” has been around a while: The inventor of airplanes took inspiration from the wings and aerodynamics of birds. What has previously been viewed as exceptional takes on a new dimension. This view of the relationship between science and nature has led to a discipline called “biomimicry,” which is paving the way for a unique source of simple and effective progress. Biomimicry will help address the necessities of the 21st century, along with genetics, quantum computing, artificial intelligence and nuclear fusion.

It can reconcile technology and ecology.

While we are only in the infancy of the discipline, we already know that it has a tremendous future ahead of it. It ultimately can allow us to reconcile technology and ecology. Ecology without technology fails, and technology that does not respect the planet will end up destroying it. We need to adopt this approach “at the crossroads of science, ecology and philosophy,” says Alain Renaudin, president of the NewCorp Conseil innovation agency.

In France, we have the means to start, with the world’s second-largest biodiversity reserve, top-level academic research, start-ups and a throng of passionate people who have already set up a basic network. Kalina Raskin, an engineer with a Ph.D. in biology, co-founded Ceebios, a control center that links labs and industry. Yet, while the United States, Germany, Japan and China are accelerating, public authorities in France have been slow in grasping its importance. 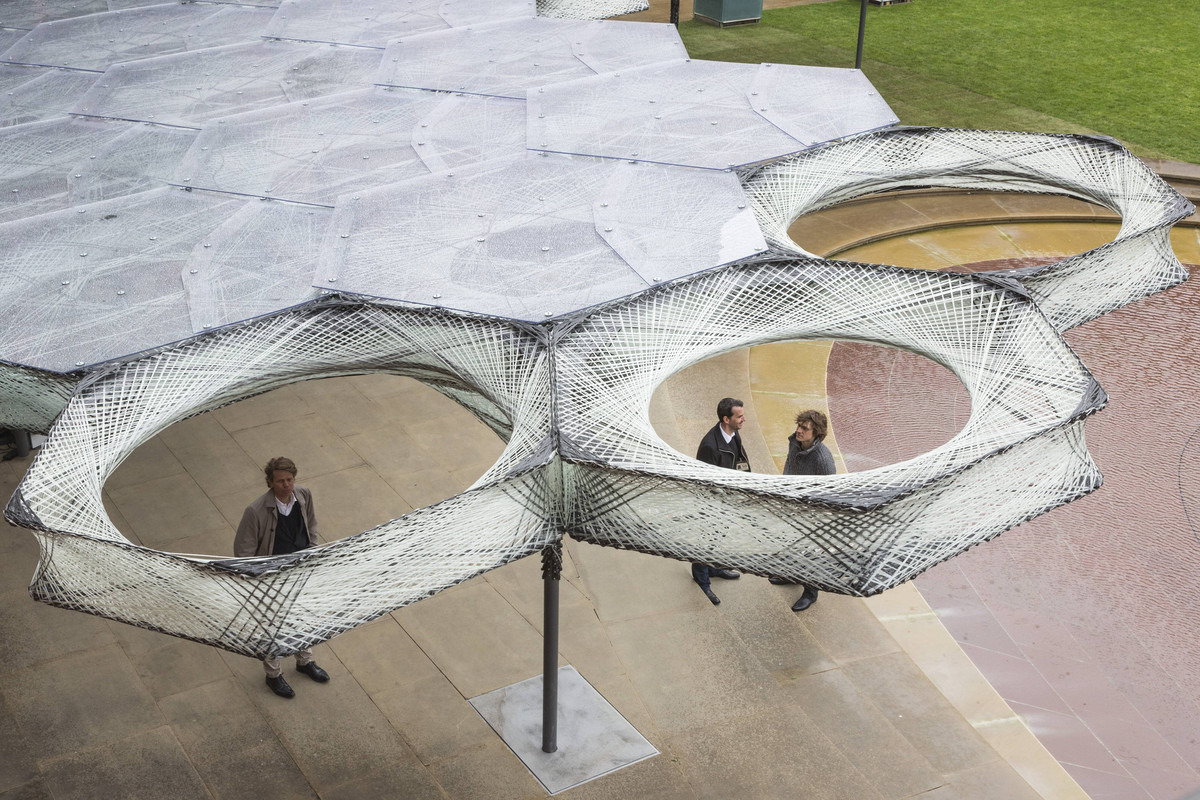 The Elytra Filament Pavilion is inspired by lightweight construction principles found in nature and mimics the fibrous structures of the forewing shells of flying beetles known as elytra — Photo: Imago via ZUMA Press

Chrystelle Roger, founder of the consulting firm Myceco, says the the interdisciplinary aspect of biomimicry means that it often doesn’t fit under any single government department.

“It doesn’t tick all the boxes,” says Roger. Still, it’s becoming more central in the private sector, with biomimicry research and products already present in a few large companies such as L’Oréal, Airbus and Dassault.

Since 2014, around 30 start-ups in the field have launched with a combined financing of 450 million euros, says Alain Renaudin, who nevertheless says biomimicry deserves 10 times this investment. Bio-inspiration is bound to achieve considerable progress in the fields of medicine, agriculture, materials and industry. And for those who understand the needs of this century, biomimicry will create great possibilities in a new era of industrialization. Nature is not only generous and intelligent, but it can also renew capitalism by giving it the sustainable Holy Grail of productivity and profit.

All rights reserved © Worldcrunch – in partnership with THE ECHOES