Latest News
Home /How will Biden’s infrastructure play shake out in Congress? (via Qpute.com)


With help from John Hendel and Cristiano Lima

Editor’s Note: Morning Tech is a free version of POLITICO Pro Technology’s morning newsletter, which is delivered to our subscribers each morning at 6 a.m. The POLITICO Pro platform combines the news you need with tools you can use to take action on the day’s biggest stories. Act on the news with POLITICO Pro.

— Google pile-on at the FTC: Advocates are demanding the FTC investigate Google over children’s privacy concerns they say the agency “failed to act” on in 2018. That won’t sit well as the FTC faces fresh fire for its handling of a separate Google probe almost a decade ago.

— House GOP’s new tune: In a step beyond their usual criticisms of social media giants over bias, House Energy and Commerce Republicans are now demanding answers from Google, Facebook and Twitter on children’s online safety issues.

Got a news tip? Write me at [email protected], and follow @Ali_Lev on Twitter and @alexandra.levine on Instagram. An event for our calendar? Send details to [email protected]. Anything else? Team info below. And don’t forget: Add @MorningTech and @PoliticoPro on Twitter.

The internet has changed a lot in the 25 years since lawmakers last passed comprehensive internet regulations. It’s time for an update.

See how we’re making progress on key issues and why we support updated regulations to set clear rules for addressing today’s toughest challenges.

TODAY: BIDEN TO UNVEIL $100B BROADBAND PLAN — Biden will lay out details of his multitrillion dollar infrastructure plans during a speech today in Pittsburgh, which will include provisions delivering $100 billion aimed at closing the digital divide and billions more to bolster R&D in innovation in areas like semiconductors. And as he does, the key question on our minds will be: how will Congress transform that vision, and will Republicans have a seat at the table?

— What’s in it: The Biden plan harmonizes with ambitious ideas from top congressional Democrats and proposes $100 billion aimed at internet connectivity, according to an administration fact sheet. The proposal will try to “future proof” investments in both unserved and underserved parts of the country and favor support for internet networks tied to local governments, nonprofits and cooperatives. The proposal would lift barriers that prevent local governments from running these networks (many states have restricted such networks, which GOP lawmakers in Washington favor doing) and require broadband providers to clearly disclose what prices they charge customers.

And bring on the R&D: One section of the proposal would allocate billions for federal R&D, bolstering the National Science Foundation with $50 billion to create a technology directorate. R&D priorities include quantum computing and artificial intelligence.

— How that bodes for Congress: White House press secretary Jen Psaki told reporters Tuesday that Biden is open to negotiating the contours, which could mean congressional Democrats and Republicans will wrestle over and modify its shape, even as some Democrats say they’re open to moving these investments under the reconciliation process (where they could bypass GOP negotiations, as they did with recent Covid relief).

— Republicans are floating their own broadband fixes: Those include a $20 billion Senate measure and bipartisan efforts, such as two bills (supporting unserved areas, and libraries) involving Sen. Joe Manchin (D-W.Va.).

Congressional Democratic leaders tout their own bigger packages in line with Biden’s proposal, favoring roughly $100 billion for internet infrastructure and digital equity support. “I’m convinced that broadband is critical to us continuing our march toward a more perfect union and to live out the mantra that we all love: e pluribus unum, out of many one,” House Majority Whip Jim Clyburn told John. During the Competitive Carriers Association conference on Tuesday, House Energy and Commerce telecom subcommittee Chair Mike Doyle (D-Pa.) said such government subsidies are vital because “the business case just doesn’t exist for too many communities.”

— Early political sticking points: The size of these broadband investments and the terms of offering such subsidies. “Frankly, I’m a little worried there’s not enough oversight going on,” Republican FCC Commissioner Brendan Carr cautioned at the same conference on Tuesday, worrying about policymakers hiking the required floor for broadband speed. Republicans say they’re concerned about government-subsidized service making it difficult for private carriers to compete in areas where they’ve already invested in infrastructure.

MEANWHILE: HOW’S THAT BROADBAND MAPPING COMING? — Looming over these investment debates is the ongoing and bipartisan frustration that the federal government lacks accurate broadband maps, which could help direct where to spend future telecom subsidies. Acting FCC Chair Jessica Rosenworcel updated lawmakers in a letter released late Monday, telling Republicans that the data architect she’s brought on has some deadlines coming up in April and May.

— And in the wake of the FCC’s solicitation for industry input about creating the map, the agency (starting today, and through April 14) wants to meet one-on-one with industry officials drilling down on their mapping ideas. One goal, per the FCC, is to allow “industry to display to the government their production ready solution.” Next up? Likely a formal request for proposals, which the agency will soon need to proceed with launching updated maps in a matter of months — as Rosenworcel has said she wants to do.

— View from the Senate: Bring in the FCC commissioners to sort out these details, Senate Commerce ranking member Roger Wicker (R-Miss.) said in a letter on Tuesday, requesting a hearing with commissioners in the next month.

GOP FCC LEADER CALLS TO CURB CHINESE RISKS IN TELECOM — The FCC’s Carr called on Tuesday for the agency to take more advantage of its equipment authorization powers to limit the use of telecom gear from Chinese giants Huawei and ZTE. The FCC is already barring the use of federal subsidies to purchase any services or equipment from these companies, deemed security threats tied to Beijing, but the GOP official wants the agency to go even further. Separately, he said, the FCC could use these same authorities to limit approvals of electronic devices produced with forced labor.

And beyond broadband land…

MORE TROUBLE FOR GOOGLE AT THE FTC? — Children’s advocacy groups are pressuring the FTC to open an investigation into Google for allegedly recommending to kids apps that violate federal children’s online privacy law. In a new complaint filed today with the agency, Campaign for a Commercial-Free Childhood and the Center for Digital Democracy claim that the Google Play Store is encouraging youngsters to use apps that they say aren’t COPPA-complaint (they may, for example, collect and sell kids’ data without parental consent, according to the groups).

“Parents reasonably expect that Google Play Store apps designated as ‘Teacher approved’ or appropriate for children under age 13 comply with the law protecting children’s privacy,” said Angela Campbell, a children’s tech policy expert affiliated with Georgetown Law. “But far too often, that is not the case.” (Google marketing directs families to find “‘teacher approved’ kid-friendly app content” through Google Play.) That apparent misrepresentation could violate the FTC Act’s provision against unfair and deceptive practices, per the complaint.

— The bigger picture: The new complaint re-ups a more than two-year-old request from a broader coalition for the FTC to investigate, but “the FTC failed to act,” Campbell said, and now “must hold Google accountable for violating children’s privacy.”

That line that the FTC failed to take action against Google is all-too-familiar in Washington right now — and a sensitive subject for the FTC. The agency has been under fire in recent weeks after blockbuster reporting by POLITICO’s Leah Nylen revealed how the Obama-era FTC let Google off the hook a decade ago, even after a lengthy investigation then turned up substantial evidence of potentially anti-competitive behavior by the tech giant. Pressed on the matter at a hearing two weeks ago, acting FTC Chair Rebecca Kelly Slaughter told Congress “I wish” the agency had sued Google at the time.

— Google did not respond to a request for comment before MT was put to bed.

In letters Tuesday to Google, Facebook and Twitter, the panel’s GOP leaders called on the companies to disclose any research they have conducted or paid for into how their products affect the mental health of users 18 and under.

— A notable shift in messaging: The no-frills, kids-focused, document-seeking missive marks a different approach for E&C Republicans, who last year demanded in a letter that the panel’s Democratic leaders haul in the tech CEOs to testify about “censorship” controversies. While that letter alluded to the fact that Democrats and Republicans “share concern over [the social media companies’] inability to properly protect our children from online harms,” the issue took a backseat to their accusations that Silicon Valley companies are biased against conservatives. 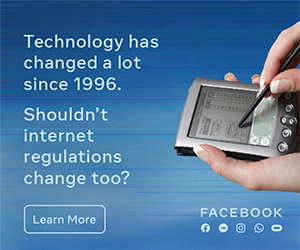 Carla Cooper, former vice president of finance and strategy at Salesforce, was named the new CFO of Contentful.

IBM and the Cleveland Clinic have joined forces to launch the Discovery Accelerator, a decade-long partnership researching how quantum computing, AI and other emerging tech can address public health threats like Covid, HIV/AIDS, Dengue Fever and Zika. … The Bipartisan Policy Center is launching a new industry task force focused on advancing environmental, social and governance goals, led by Douglas L. Peterson, president and CEO of S&P Global. … The FCC adopted a report and order to establish the next phase of its Covid-19 Telehealth Program and will likely open the application window for this second round of telehealth funding within the next month.

Against the backdrop of Alabama: “The number of charges filed with the National Labor Relations Board accusing Amazon of interfering with workers’ right to organize more than tripled during the pandemic,” NBC News reports.

And oh my, my: “Twitter moved to shutter several accounts this week purporting to be Amazon warehouse employees, after the social media site’s users discovered they were fake,” WaPo reports.

It’s been 25 years since comprehensive internet regulations passed. But a lot has changed since 1996.

Across the pond: The video-game maker Epic Games lodged a complaint against Apple before the U.K.’s Competition and Markets Authority, POLITICO reports.

Sticking it to the man: Google rival DuckDuckGo took a swing at the giant for touting its phasing out of cookies as a privacy move. “Will eliminating third-party cookies and related developments completely prevent trackers that are lurking behind websites from getting your browsing history?” DuckDuckGo wrote in a new blog post. “Unfortunately, the answer is no.”