The new program will aid in better allocation of research dollars to new quantum computing initiatives both inside and outside the government. 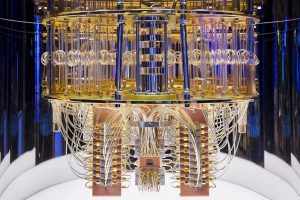 The inside of IBM’s quantum computer.

Explaining the significance of the new program, Joe Altepeter, program manager in DARPA’s Defense Sciences Office, was quoted as saying in the news release, “Building a useful quantum computer is really hard, and it’s important to make sure we’re using the right metrics to guide our progress towards that goal. If building a useful quantum computer is like building the first rocket to the moon, we want to make sure we’re not quantifying progress toward that goal by measuring how high our planes can fly.”

“Quantum Benchmarking is focused on the fundamental question: How will we know whether building a really big fault-tolerant quantum computer will revolutionize an industry?” Altepeter was also quoted as saying in the statement.

As the DARPA statement explains, one of the key problems plaguing the development of large-scale fault-tolerant quantum computers is the absence of standard benchmarks against which claimed breakthroughs in quantum computing could be measured and compared. As of now, several private players are pursuing quantum computers – including Google and IBM – but absent commonly agreed standards, it is hard to accurate value progress even as money pours into these initiatives.

“Companies and government researchers are poised to make large quantum computing investments in the coming decades, but we don’t want to sprint ahead to build something and then try to figure out afterward if it will be useful for anything,” Altepeter explained in the DARPA news release.

In October 2019, in a paper in the journal Nature, Google announced that its quantum computer Sycamore, using 53 qubits, had achieved “quantum supremacy” – that it had performed (an albeit contrived) calculation beyond the reach of every “classical” computer in any reasonable time frame – even the fastest supercomputers available. This result was quickly challenged by rival IBM, which claimed it had been overhyped by the internet giant. (For a readable yet comprehensive article on the quantum computing race between IBM and Google, see this MIT Technology Review piece from February last year.)

The Trump administration had – as part of its “great power competition” posture directed at China – pushed quantum information science hard, along with other emerging tech such as artificial intelligence. In 2018, Trump had signed the National Quantum Initiative Act, which had bipartisan support in both the House and the Senate and authorized spending $1.2 billion till 2023 to pursue federal research activities in the field and create an appropriate workforce around it.

Get briefed on the story of the week, and developing stories to watch across the Asia-Pacific.

However, some experts remain unconvinced about the utility of big spending on quantum information science and associated tech – including the development of all-purpose, large quantum computers – in maintaining a national security edge. (The marquee national security implication is that existing cryptographic systems – no matter how sophisticated – would be vulnerable to being broken with quantum computers.)

Suitable benchmarking standards – as DARPA proposes to develop through the new program – would aid in developing a realistic pathway to quantum computers, and could indeed help assess the value of various developments in the field for federal policymakers, including in the defense establishment.

The US must invest in…