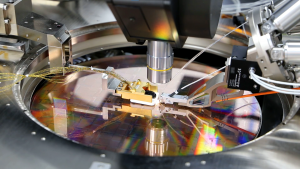 The companies say they can manufacture core quantum components, such as single-photon sources and single-photon detectors, with precision and in volume, using standard semiconductor manufacturing processes.

The companies have installed proprietary production and manufacturing equipment in two of GLoFo’s 300mm fabs to produce thousands of Q1 silicon photonic chips at its facility in upstate New York, and state-of-the-art electronic control chips at its Fab 1 facility in Dresden, Germany.

PsiQuantum’s Q1 system represents advances in silicon photonics, which the company believes is the only way to scale to 1 million-plus qubits and beyond and to deliver an error-corrected, fault-tolerant, general-purpose quantum computer.

The Q1 system is the result of five years of development at PsiQuantum. The team made it their mission to bring the world-changing benefits of quantum computing into reality, based on two fundamental understandings:

2) Leveraging the 50-plus years and trillions of dollars invested in the semiconductor industry is the only path to create a commercially viable quantum computer.