Since late 2020 into the March 2021 quarter, the public markets have created a flow of over $4 billion of fresh capital for innovators building upon photonics technologies via special-purpose acquisition companies (SPACs). Six lidar firms alone have completed or are in process of becoming public, taking in over $2.6 billion in investment, with target 2025 revenues of over $6 billion combined—up from under $150 million in revenue combined in 2020.

Several of these firms have projected their revenue alone in excess of $5 billion in 2030. Such bold hyper-growth plans will require their photonics suppliers to step up if they are to hit the goals in ramping up for the pervasive autonomous vehicles that are expected to roll out (see Table 1).

In addition to these six independent lidar firms, there are capital flows coming to this market with the likes of Argo.ai, Waymo, and Aurora having deep pockets and getting in line for public IPOs. Investments in these six firms are coming from diverse deep pockets: 1) large corporations (Amazon, Daimler, BMW, Conti, Magna, Samsung, Volvo, Bosch, VW, Nikon, Denso, and Uber); and 2) the largest global funds (Fidelity Investments, Baillie Gifford, and others).

Yet, it’s not only lidar that is driving the future of photonics with demands to scale and innovate. Rockley Photonics’ SPAC, focused on photonic integrated circuits (PICs) for healthcare sensors, and Velo3D, focused on laser-based 3D printing, are both bringing in big capital and major new end markets for photonics. Communications, of course, keeps charging ahead with several datacenter and satellite communications SPACs, and now we have seen in IonQ the first quantum computing SPAC.

The typical questions being asked are, is this a bubble and can it continue? The more interesting questions are, what does this mean for the supply chain and more specifically for photonics players both large and small throughout the ecosystem? First, the cash is in-pocket of these firms, aching to be spent on ramping suppliers, hiring talent, driving per-unit costs down, and getting deployments into scale. Well-funded applications software firms and users are counting on this to fuel a new generation of value-added solutions and services. Second, more capital will be flowing as the IPO market ramps globally, plus the existing base of hundreds of public SPACs with billions of cash and supporting major investors, and large corporations pursuing aggressive buy-and-build businesses across an array of technology businesses that are consumers of bandwidth, which in turn requires photonics.

In recent Laser Focus World quarterly articles, we showed that the LightWave Advisors U.S. Photonics Index closely mirrored the Semiconductor SOX Index, while the International Photonics Index trailed the SOX and U.S. Photonics indices but generally outperformed the S&P 500 (see Fig. 1). In reviewing the Q1 data we see the similar pattern, so here we’ll dig deeper into an analysis of the mix. 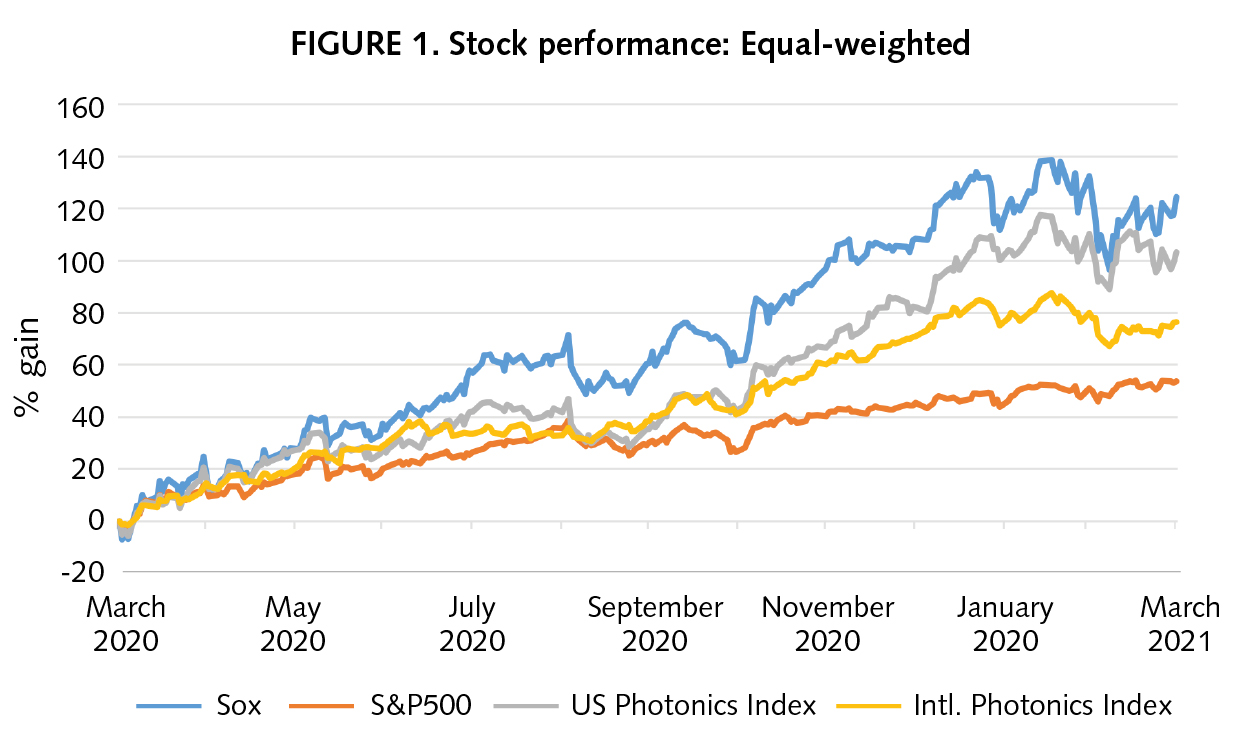 Table 2 provides a summary of photonics stock performance, including our newly created “emerging growth” set of firms. This group includes the newly public lidar firms and several others with modest revenue to date that have seen large stock appreciations in the recent year. These 10 firms have a median market value of $2.1 billion, compared to $9 billion for U.S. photonics index firms and over $30 billion for SOX firms.

While the LightWave Advisors Photonics Indices have a requirement to have a minimum of $500 million market value, we considered input to include smaller public firms, for which many exchange-traded funds (ETFs) allocate a modest portion. With SPACs and other small companies getting investor attention, several firms with modest revenue and history have been garnering market values in excess of $500 million. To include these in our primary ecosystem indices would have a distorting influence because they have shown and will show high volatility in stock process and are valued at multiples based on 4- to 5-year out revenue and earnings before interest, taxes, depreciation, and amortization (EBITDA) rather than current or next-year results. Thus, a logical step is to monitor these firms separately as “emerging growth firms” and to set minimums for inclusion to the core indices, such as to require attaining in excess of $100 million annual revenue and a minimum amount of public trading time, in order to keep the core indices as representative of the sector.

So, what does this mean for the photonics sector? A cycle of hyper-innovation and competition is underway, fueled by hyper-capital flows. Expect demand for talent by well-funded firms to draw people in, and expect demand for productivity improvements in scaling volume and product reliability to escalate. Expect M&A to play a role in filling company gaps and for many smaller firms with limited capital access to choose partners to share the challenges of scaling and competitive demands. Expect some exceptional growth opportunities to arise along with substantial risks to navigate, similar to what the photonics sector faced in the late 1990s and early 2000s.

As a frame of reference, the public lidar firms are forecasting a global total available market (TAM) size of $30 to $200 billion in 2030, with Luminar indicating a $500 billion TAM in 2040 for lidar hardware and software. With prices and bill of materials (BOM) costs targeted to decline with volume ramp, Velodyne, for example, has publicly stated it could potentially ship over 8 million units cumulatively into 2025, compared to 11,700 shipped in 2020. LightWave Advisors and industry friends have built “teardown models” to quantify what is at stake for the photonics supply chain flowing from just lidar and quantum systems applications forecasts publicly made in SPAC filings (see Fig. 2). 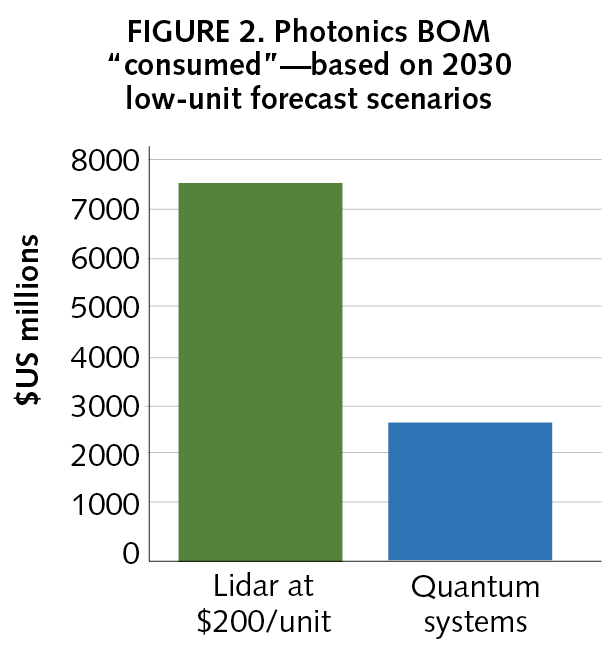 To put these figures in perspective, the 2030 demand for components and modules in just lidar and quantum systems could approach the equivalent of creating five firms by 2030 with the revenue scale of Lumentum in 2021. Whether plausible or possible, investors are feeding the capital in to drive disruptive growth and want you to step up as critical cogs in the supply chain—are you up to this challenge to innovate and execute?

What makes quantum computing so…