CAMBRIDGE, Mass., May 20, 2021 — Researchers at Raytheon BBN Technologies developed a method of single-photon detection based on a Josephson junction. The advancement, which is poised to spur development in sensor, communication, and quantum processing technology, features the Josephson junction in a role that is analogous to that of a transistor in electronic systems, said Kin Chung Fong, a quantum information processing scientist at Raytheon BBN Technologies. Fong is also a research associate at Harvard University.

The work builds on previous research into a microwave radiation detector 100,000× more sensitive than existing systems. The new work focuses on photons, which possess wavelengths four orders of magnitude shorter than microwaves.

“To detect photons, we typically use photodetectors for visible and near-infrared photons, where amplifiers are used for microwave,” Fong told Photonics Media. 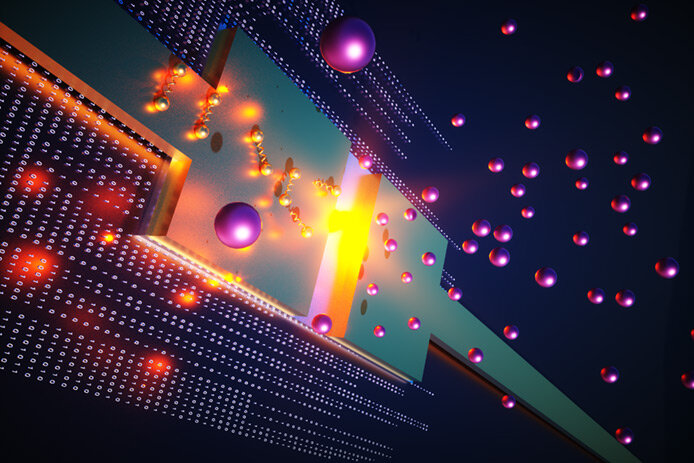 This illustration depicts a component known as a Josephson junction that can detect a single photon of light. The research has potential applications for sensors, communications, and quantum computers. Courtesy of Raytheon BBN Technologies.

“For more than 50 years since Brian Josephson discovered Josephson junctions and won the Nobel Prize, many have asked if his discovery could be used to measure photons,” Fong said.

He and his team employed graphene to build the device. Fong explained how the process works, which begins with a laser.

“It is pulse modulated to reduce the number of photons before going through optical fiber to a cold environment housing our Josephson junction,” Fong told Photonics Media. “The device is made out of a superconductor with graphene. When the photon enters the detector, it breaks the superconducting Cooper pairs and produces normal electrons, creating noise, triggering a detector, and registering the photon.”

The device currently operates at very low temperatures, Fong said. However, it could be augmented for incorporation into higher-temperature technologies.

“We could potentially use this breakthrough as an optical interconnect to communicate and control a quantum computer through fiber connections. The invention is essentially a light-sensitive switch for high-performance computing environments in cryogenic temperatures,” Fong said. “Given we now have [a] single-photon detector based on a Josephson junction, we envision this new invention can be used to develop quantum computers and network[s] at higher temperatures.”

The researchers plan to study the process further to advance their understanding of how exactly the noise triggers the Josephson junction to detect a single photon.

In terms of applications for the technology, Fong said, “The first thing I think about is the optical interconnect, which turns photons into an electrical signal or vice versa. Using the single-photon detector could allow a configuration where a quantum computer is controlled directly with light instead of an electromagnetic device. We can then think about how to build up a quantum network via optical links.

“Furthermore, we can detect light as individual quanta, but also the quantum state of the photons themselves. We are now working toward a new detector that can see the photon-number state. Such a detector will be useful in protecting communications links from eavesdroppers and attacks.”

Australian and US universities make…

Did AI come from ET?…

Hacking the Machines that Make…