Joe Biden will use this week’s G7 summit to encourage allies to join Washington in taking a harder stance towards Beijing, as the US president capped a string of new actions with an executive order to boost scrutiny of Chinese software and apps.

The ratcheting up of pressure sets the stage for the UK-hosted summit, when Biden hopes to convince his counterparts to rebuke China over its persecution of Uyghurs in Xinjiang, its crackdown on the pro-democracy movement in Hong Kong, its economic coercion of countries such as Australia, and aggressive military activity in the South and East China Seas.

As he boarded Air Force One on Wednesday for his first overseas trip as US president, Biden said he would use his week in Europe to strengthen alliances and “make it clear to [Russia’s Vladimir] Putin and to China that Europe and the US are tight”.

The executive order, which aims to protect the personal data of Americans, including health and genetic information, was the culmination of weeks in which the administration has turned the screws on China.

The Senate this week passed a bipartisan bill that would provide $250bn to help the US maintain a competitive edge over China in critical technologies such as artificial intelligence and quantum computing.

The Pentagon on Wednesday finished a three-month review of attempts by China to challenge US defence strategy, after concluding that Beijing had become one of its most serious “pacing threats”.

There is persistent concern . . . that the US is too confrontational and is asking countries to choose between the US and China even though we say we are not

“We’ve seen a real commitment by the Biden administration to push back against China,” said Bonnie Glaser, a China expert at the German Marshall Fund. “For many people, the administration has surprised on the upside.”

After attending the G7 gathering in Cornwall, Biden will participate in EU-US and Nato summits in Brussels, before meeting Putin in Geneva. The focus on China comes as he talks less about the summit with the Russian president amid criticism that Biden is meeting a leader who he recently called a “killer”.

A senior EU official cast the meetings as a vital opportunity to bridge potential divisions and achieve a “balanced approach”.

“[We] expect G7 leaders to commit to better co-operation and align strategies on China,” the official said.

The EU shares many US concerns about China but has been less keen to be part of an overt anti-Beijing alliance. It is also contending with its own tensions with Washington in important areas, such as trade and electronic privacy.

The 27-member European bloc and the US intend to “closely consult and co-operate” within “similar multi-faceted approaches to China, which include elements of co-operation, competition and systemic rivalry”, according to draft conclusions for the separate EU-US summit next week. 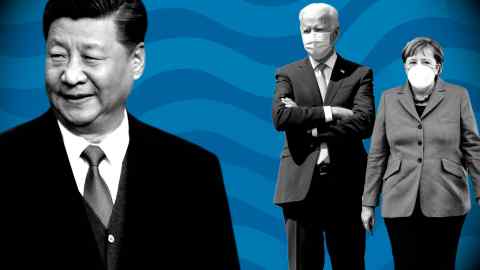 Shared US-EU concerns include Xinjiang, Tibet, Hong Kong and security in the East and South China Seas, according to the draft statement, which is still subject to revision.

However, Biden will face challenges with some countries who are concerned about being caught in a growing fight between Washington and Beijing.

“There is persistent concern . . . including in Europe that the US is too confrontational and that the US really is asking countries to choose between the US and China even though we say we are not,” Glaser said.

In issuing an order to protect US data from China, Biden also revoked a Trump-era ban on Americans using the Chinese-owned TikTok and WeChat apps, which had become neutered after being challenged in US courts.

The new order is intended to provide a mechanism to conduct a “rigorous, evidence-based analysis” to assess the risks posed by software from foreign adversaries including China, in a way that will survive legal scrutiny unlike the Trump ban.

The FT has revamped Trade Secrets, its must-read daily briefing on the changing face of international trade and globalisation.

Sign up here to understand which countries, companies and technologies are shaping the new global economy.

Internet of Things (IoT) in…