AMES, Iowa – In these days of science-by-supercomputer, Iowa State University physicist Srimoyee Sen still prefers to go about her work with pen and paper.

Her research is all about analyzing, theorizing and explaining some of the observations, measurements and phenomena that experimental physicists and astrophysicists see in their big data. 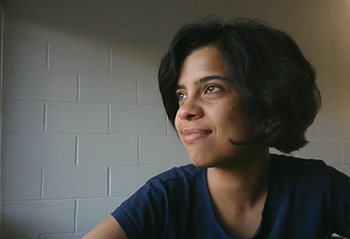 “My background has been quantum field theory,” Sen said of the physics that explains the tiny forces and interactions at subatomic scales. “I apply my work to nuclear physics, condensed matter physics as well as particle physics.”

Pen and paper can still work for all of that.

The focus of much of her work, Sen said, is “to understand how matter behaves under different circumstances.” That could include studying “how ordinary matter behaves in extreme conditions of temperature and density.”

Her work, for example, could help explain what happens to the matter within a super-dense neutron star, the star that’s left after a massive, dying star collapses in on itself.

Sen’s work in quantum materials has recently won support from the U.S. Department of Energy’s Early Career Research Program. She’s one of 83 scientists from American universities and DOE national laboratories selected for the award. She’ll receive about $150,000 per year for five years for salary and research expenses.

“Maintaining our nation’s braintrust of world-class scientists and researchers is one of DOE’s top priorities – and that means we need to give them the resources they need to succeed early on in their careers,” said Secretary of Energy Jennifer Granholm in a statement. “These awardees show exceptional potential to help us tackle America’s toughest challenges and secure our economic competitiveness for decades to come.”

The Office of Nuclear Physics and the DOE’s Established Program to Stimulate Competitive Research selected Sen’s project for funding.

Sen said the grant will help build her research group, including support for a postdoctoral research associate and a doctoral student.

“This will help me train my students and postdocs in the problems I study and the techniques I use and will in turn enable me to learn from them,” she said. “The grant will also help their careers by facilitating travel to scientific conferences and workshops.”

Her primary goal is to deliver to the DOE a better understanding of the ties between lattice field theory – developed to facilitate numerical simulations of quantum field theories – and the physics of exotic quantum phenomena in terrestrial materials.

“These ties have not been explored in the past to a great extent and yet have the potential to transform our understanding of quantum chromodynamics and lead to the discovery of new quantum materials,” Sen wrote in a summary of her work.

The new structures that show up in her handwritten analyses – new quantum materials with potentially exotic properties – could one day contribute to speedy quantum computing and other emerging technologies.