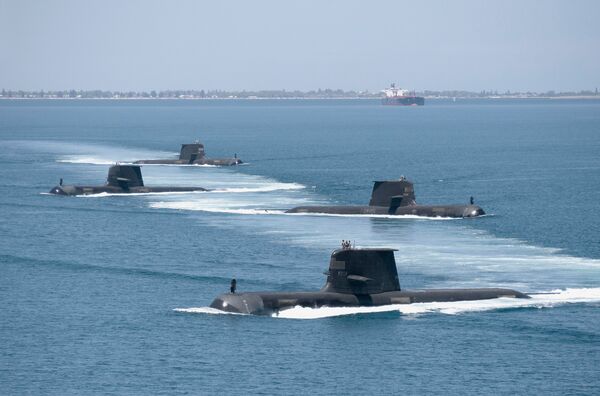 Four of the RAN’s six Collins-class submarines in close formation while transiting Cockburn Sound in Western Australia. These conventionally powered boats will now be replaced by a fleet with nuclear propulsion. (Lt C Prescott/Commonwealth of Australia)

Australia’s far-reaching strategic decision to procure a fleet of nuclear-powered submarines with the assistance of the United States and United Kingdom was driven by three convergent situations, according to sources familiar with the background to the surprise 16 September announcement.

Frustration over issues with the French contract converged with concern over China’s rising assertiveness in the South China Sea and a dramatic deterioration in relations between Beijing and Canberra, the sources said.

Most importantly, discreet enquiries triggered by Australian Prime Minister Scott Morrison in 2020 had ascertained that submarine technology that was not previously available had evolved to a point where a nuclear-powered fleet did not require the support of a civil nuclear infrastructure.

A top-secret task force headed by Commodore Tim Brown, director general of RAN submarine capability, subsequently reported that not only were the technical aspects of such a programme possible, but the will to make it happen was gaining pace with the UK and the US, the sources said.

By April Morrison had suggested a three-way formal framework that would go beyond helping Australia develop a nuclear-powered submarine fleet and involve co-operation on issues such as hypersonics, quantum computing, quantum communications, artificial intelligence, and cyber security.

Already a Janes subscriber? Read the full article via the