Deep tech is much talked about by governments, and the European Commission especially, but often without an explanation of what it actually is. Only by defining, and therefore assessing, its character can we consider its place in the European startup ecosystem.

Stephen Nundy, partner at Lakestar, and Yoram Wijngaarde, founder and chief executive of Dealroom, in conversation about the future of deep tech and its role in Europe’s future.

Venture capitalists are increasingly interested in deep tech as outcomes for successful bets are highly rewarding and some 25% of all VCs now have interest in it. Another appeal is that people want to be associated with deep tech investing because it makes them feel like they are pushing boundaries and becoming part of something that will really impact society. 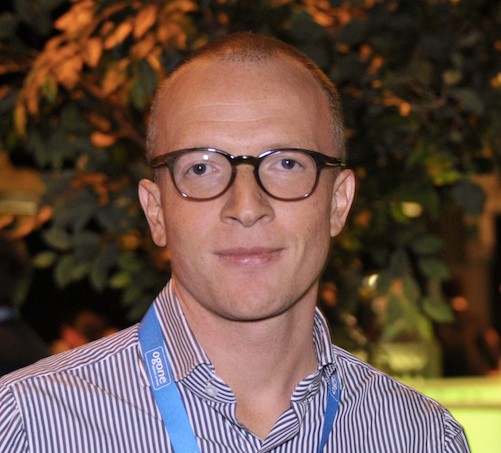 Examples of current deep tech areas include quantum, rockets and autonomous driving. But deep tech can also exist in some form within mainstream companies. Streetbees is a Lakestar investment that provides insights based on feedback, but with its use of GPT-3 it is pioneering word clustering, using 20 data scientists to build this capability in-house. Even within more traditional companies there can be pockets that are experimenting on pulling deep tech into commercial tech.

Companies can also shape-shift between being deep tech and mainstream: sometimes they start by working on solving a very complex problem and later they become a SaaS (Software as a Service): for example, UiPath would not today be described as a deep tech company, but it likely was in its earliest days. Some companies also travel in the other direction: Amazon started as just being an e-commerce business and now it is heavily involved in doing frontier-type deep tech.

The importance of deep tech for Europe… and vice versa

Europe’s role in advancing deep tech will be crucial, not just for the sector but for the continent itself. As deep tech assets evolve into the mainstream over the next 10–20 years it is vital that Europe maintains control of that development. Maintaining tech sovereignty, as well as European ethics, will require nurturing deep tech entrepreneurs and supporting them on their journey.

If Europe does not back these startups, someone else will. Successful companies will at some point want to globalise and there will be a lot of appetite from the United States and Asia to find those companies in Europe. European VCs therefore have to stand up and take the risk to get into deep tech startups at an early stage.

If Europe does not support its homegrown deep tech startups then we just become net importers of tech, which in turn makes us net importers of the data, behaviours and ethics that have evolved in other continents. While there’s nothing wrong with buying tech from, for example, the US, it means importing US values, US regulations and levels of quality. If Europe wants to control its culture, heritage and value system, then it needs to use its own data and develop technologies that are fed from our own underlying view of the world.

Another way to look at the argument against importing tech is that ultimately it will be second-hand and we would be getting it many months after it has been available in those other continents.

In fact, Europe is doing rather well right now in terms of funding and is seen as an attractive place for capital. This is thanks to US and Asian VCs being equally happy to put their money into Europe rather than into each other’s territories. They can, at the same time, acquire exposure to the value in Europe but through European vehicles, allowing us to maintain tech sovereignty and European ethical points. 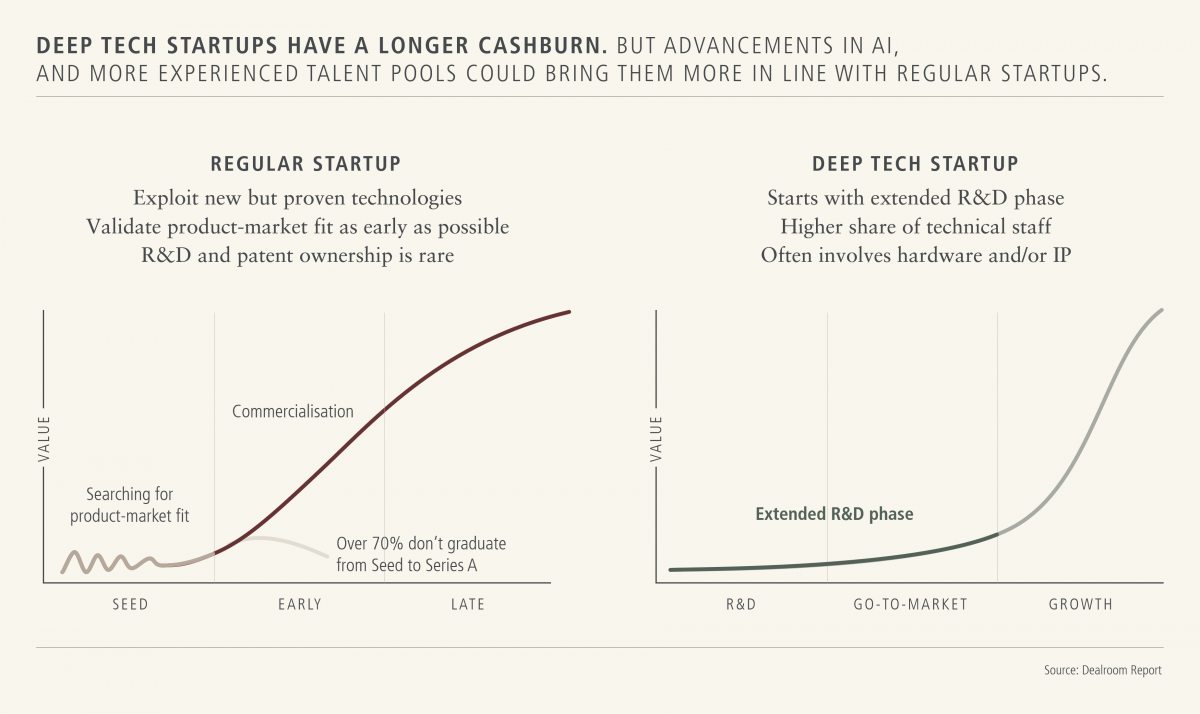 How deep tech can help itself

Deep tech startups can learn from each other. Streetbees and Eigen Technologies, for example, are not a million miles apart in terms of what each actually does: each uses or experiments with GPT-3, with Eigen doing natural language processing (NLP) on long-form legal contracts while Streetbees, as mentioned above, collects real-time data. Lakestar has connected these two teams together so they can learn from each other.

There will be more opportunities among other companies to connect the dots on how people are building software or how they are building their companies technically. Lakestar has launched a chief technology officer (CTO) Slack community for that very purpose. As companies progress beyond the very early stage and look to scale up, there will be more opportunities to understand how other people are using technologies and leverage that knowledge.

The usual evaluation metrics, such as cost of acquisition and gross margin, cannot be applied to deep tech startups. Instead, evaluation relies on expertise to identify commercialisation steps that are more akin to previous investments. For this, Lakestar leverages a network of experts—CTOs, data scientists and deep tech specialists, as well as paid consultants. Even if this bench of people do not understand the business, they can offer their perspectives and share facts, which Lakestar can distil into an investor view. Some deep tech startups are completely under the radar, but a picture can emerge from the use of metrics such as app downloads, website visits, trade register data, IP data or innovations data.

Campus contribution: The role of universities in deep tech

It is a common perception that Europe is world-class in research but lags behind in commercialisation. However, Europe has become much more entrepreneurial and talented individuals are today much more likely to join or start a startup than 5 or 10 years ago. Contributing to this is the large presence of companies doing R&D in the triangle around Oxford, Cambridge and London. Elsewhere in Europe there are technical universities such as TUM in Munich, which is looking to create a quantum valley, and ETH Zurich which has just launched an AI lab. 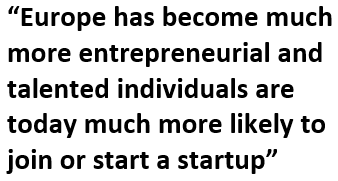 Tech transfer officers are now helping to support first-time academic founders to make the jump to entrepreneurship and understand better what it really means to create a start-up, legally, emotionally and physically.

One question that does come up, though, is whether the universities take on too much ownership in the very early stage of a company. That may hinder growth because dilution levels within the founding team are significantly impacted early and therefore the incentive structure for them to invest the next seven to 10 years of their life in the project can get eroded after one or two funding rounds.

The impact of Covid-19

Investing in deep tech is difficult enough and the curtailment of travel has been made it harder still. Investors have to judge personalities, backgrounds and vision statements for a story that has yet to be told. For a sector that requires more collaboration, being remote is a hindrance. This is especially true for groups coming out of academia as a lot of these founders have no experience of presenting a pitch deck or interacting with a VC.

On the other hand, remote relationships could present opportunities as they force people to leave their comfort zone and organise new initiatives like Slack groups. It is also easier organise online events and bring together many different people at the same time.

Who, apart from VCs, are interested in deep tech?

We have seen a trend with family offices becoming interested in deep tech. This type of investment is suited to family offices as they typically have more flexibility over the time horizon and are not restricted by an investment mandate. Most VCs invest hoping for an exit within 5-7 years, but deep tech often requires longer than that for a return. Family offices therefore bring deep tech a different source of capital and they often have more of a mission to create a legacy.

The next big thing

Several exciting fields are emerging, from a technological perspective at least: nuclear fusion, quantum computing and the use of artificial intelligence (AI) in medicine. Quantum has the potential to be a revolutionary technology that will change a lot of the traditional approaches to computing and solving problems. In the nearer term, blockchain as a way of building businesses, storing data and democratising transactions is reaching maturity.

Healthcare has received a lot of focus in the last 12 months and on the horizon is the convergence of health tech and biotech assisted by AI. This could lead to a whole new field of medicine being developed in the next five years, for cancer treatments, for example. Also in this area, the huge leaps achieved by robotics offers enormous potential for remote medicine and remote surgery. If travel continues to be restricted it becomes even more important to get the right specialists into the right parts of the world in the most effective way possible—only robots can do that.